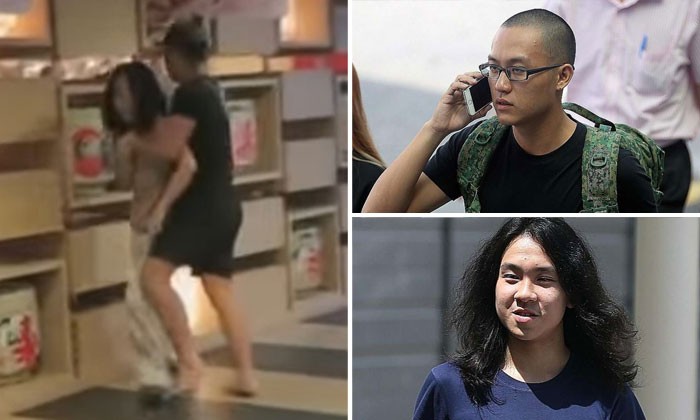 A youth confronted blogger Amos Yee for taking a video of him. This happened after Amos assumed the other man had taken his photo, a court heard.

Bryon Loke Thong Ler, 19, chased after the 17-year-old and armlocked him by grabbing his hands and blocking his path with his body.

Loke, a full-time national serviceman, yesterday pleaded guilty to using criminal force on Amos at Jurong Point in Jurong West between noon and 12.50pm on May 29 last year.

Sentencing was postponed, pending a probation report on March 1.

Deputy Public Prosecutor Teo Lu Jia said Loke and his girlfriend were at a Value Dollar shop that day when he sensed that Amos was looking at him. He decided to take a photo of Amos to prove that the teen was "stalking" him.

When Amos asked Loke if he was taking his photo, Loke claimed he was not. Loke then observed Amos pointing his camera phone at him.

Before he could ask Amos to delete the video, Amos left the shop. Loke stopped him and held the teen's hands while Amos tried to break free, shouting "Help me! Help me!" repeatedly.

Shortly after, Amos broke free from Loke's grip and ran into a FairPrice outlet. Loke then called the police, saying Amos had taken a video of him.

After Loke had paid for his item at the Value Dollar shop, he realised that Amos had left the supermarket. He chased after Amos, grabbed his hands and hugged the victim tightly from the back.

When Loke stopped armlocking Amos, he grabbed the teen's hands and refused to let go. He also used his body to block Amos from moving away. The victim again shouted "Help me! Help me!" repeatedly.

Some members of the public told Loke to stop but he did so only after receiving a phone call from Staff Sergeant Low Yong Chin.

In her sentencing submissions, DPP Teo said it was necessary to send a clear message that the authorities would not condone individuals taking the law into their own hands by resorting to the use of criminal force against another.

She said Loke had tackled and forcibly restrained the other person and this went on for some time.

"The fact that the victim is not presently in Singapore does not detract from the need to convey the message that individuals should not take the law into their own hands," she added.

Amos is seeking political asylum in the United States.

The maximum penalty for the offence is three months' jail and a $1,500 fine.