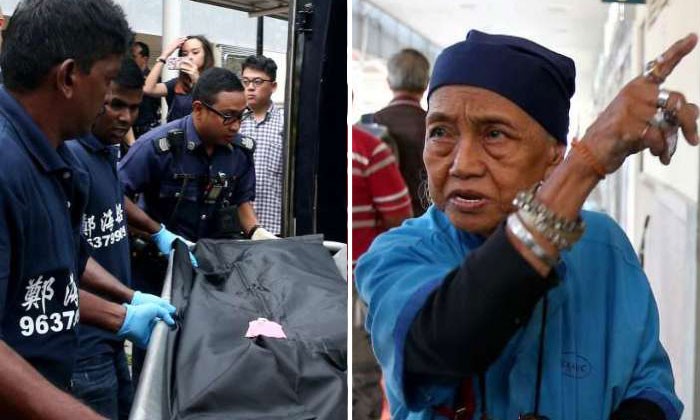 The tiny body of a newborn baby boy was found in a plastic bag in a sanitary pad bin at a women's toilet at Tampines MRT station in June.

On Thursday (Oct 20), State Coroner Marvin Bay recorded an open verdict at an inquest into the infant's death.

A 75-year-old cleaner found the baby when she was emptying the sanitary pad bin at about 1.20pm on June 3. His umbilical cord and placenta were still intact, the coroner's court heard.

A paramedic pronounced the infant dead at 1.49pm.

Investigations showed that the baby's mother likely came from Batam. She went back after the incident and has not returned to Singapore since.

There were no visible injuries on the baby, no signs of decomposition and no signs of the infant having been born inside the toilet.

Closed-circuit television (CCTV) footage showed that a 35-year-old Indonesian woman had entered the toilet at about 10am that day and left at about 11.10am. She could be seen having difficulties walking.

Her visit to the toilet was "to address and alleviate the after-effects of birth rather than to give birth to the child in the women's toilet", said Mr Bay.

Investigations revealed that she had come to Singapore at about 12.15pm on May 25 via HarbourFront Ferry Terminal. CCTV footage at the terminal showed that she was visibly pregnant.

The two Indonesian women left the toilet about 20 minutes later with the pink bag, which appeared to be lighter and swaying about.

These two women had come to Singapore together with the 35-year-old woman, who left Singapore on June 5. Her two friends left the country on June 7.

The trio are believed to have been helping out at the Hari Raya Bazaar set-up on the open field in front of Tampines MRT station. All their names have been redacted from court documents.

In an autopsy report on the infant, a forensic pathologist wrote: "Full-term infant, capable of being born alive. Unascertained cause of death. Stillbirth cannot be ruled out."

The estimated gestational age of the infant was about 38 to 42 weeks.

Based solely on autopsy findings, it cannot be proven beyond reasonable doubt that he was born alive.

If he was born alive, however, intentional suffocation cannot be ruled out; it might not leave any injuries on a newborn.

But the baby might have suffocated via natural processes, if it did not receive enough oxygen just before, during, or after birth.

And if he was born alive, but improperly cared for, the infant could also have died from causes such as dehydration, or a low blood sugar level due to non-feeding after birth.

Said Mr Bay: "The documentary and circumstantial evidence strongly point to the three women being connected with the discovery of the male infant, with Ms M likely being the mother.

"Ms M's absence from jurisdiction has made it impossible to confirm her maternity, as the DNA samples collected require a reference sample from her. It is understood that the three women, who have left Singapore, remain as persons of interest.

"Notwithstanding this, the fact that the forensic pathologist has not been able to ascertain the cause of the infant's death, or even exclude the possibility that the infant was not born alive (i.e. stillborn), would necessarily constrain me to deliver an open verdict for this case," the coroner added.

A 33-year-old Indonesian maid was arrested after she was found to have hidden a 15cm-long foetus in her bedroom drawer at her employer's home in Lorong Ong Lye. The foetus, which the maid claimed had died at birth, was believed to be five months old.

A dead baby boy was found on a staircase landing between the second and third storeys of Block 334, Bukit Batok Street 32. He was found naked in a white plastic bag. There was no blood on the body and the umbilical cord had been cut.

A premature baby was found dead in a locker at the FairPrice supermarket in the basement of Bishan Junction 8 mall. The baby, placed inside a bag, was found in a semi-decomposed condition.

A newborn girl was found dead in a toilet at Commonwealth MRT station. She was in a grey plastic bag that had been left beside a rubbish bin in the women's toilet. The body was still bloody and wrapped in yellow cloth.