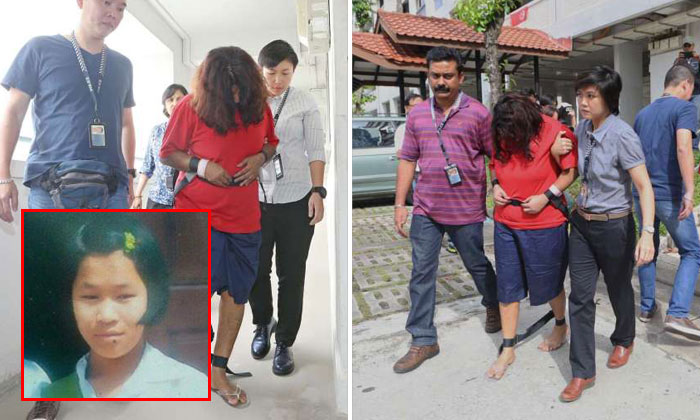 Shoulders hunched, heads bowed low and faces hidden by their hair, a mother and daughter pair accused of killing their Myanmar maid avoided eye contact as they were taken to a Bishan HDB flat for investigations on Wednesday (Aug 3) afternoon.

Housewife Prema Naraynasamy, 58, and Gaiyathiri Murugayan, 36, are accused of killing Ms Piang Ngaih Don, a 24-year-old mother of a young child, in a ninth-floor flat at Block 145, Bishan Street 11, some time between July 25 and 26. It is not yet known how she died.

The pair arrived in a white van at about 2.30pm, after which police officers led Gaiyathiri to the flat, while her mother remained in the vehicle.

Dressed in a red polo shirt and navy shorts, Gaiyathiri appeared shaken as she stepped out of the van. She hung her head low, walking in shuffled steps, till she disappeared into the flat minutes later.

She had restraints on her arms and feet and she was supported by a female police officer.

Investigators escorted her out the flat about 90 minutes later, taking along with them a blue pail and broom wrapped in brown paper as evidence.

Both mother and daughter remained quiet as they briefly crossed paths at the carpark, while Prema was being taken to the flat held by another female officer.

She was dressed in the same attire, and she similarly kept her face shrouded by her wavy hair. Unlike her daughter, Prema left her transparent slippers at the doorstep before entering the flat.

About half an hour later, police investigators were seen leaving with several bags of evidence. The suspects left the scene in the van shortly after.

They were arrested last Wednesday, a day after police were alerted to the case. Ms Piang was pronounced dead at the scene.

Both women are due to appear in court on Thursday. If convicted of murder, they face the death penalty.