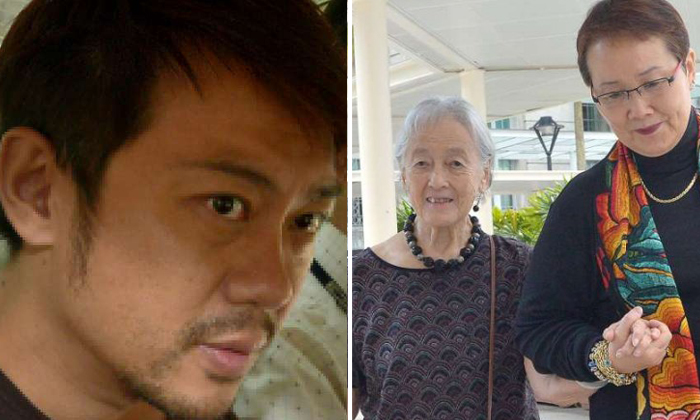 With his hands cuffed behind his back and his ankles shackled, Yang Yin was seen shaking yesterday as a judge described how the former tour guide had "bamboozled" an elderly widow into entrusting him with $1.1 million.

The 42-year-old Chinese national was sentenced to six years in jail - on top of the 26 months he received on Thursday for a slew of offences related to creating a sham business to gain permanent residency.

Yesterday's sentence came after he pleaded guilty in August to two criminal breach of trust charges for misappropriating $500,000 and $600,000 on two separate occasions from 89-year-old Madam Chung Khin Chun.

Her niece, Madam Hedy Mok, 62, frowned when the jail sentence was passed and later told The Straits Times it was "too light, too lenient".

Madam Mok and her aunt, Madam Chung, making their way to court yesterday. Madam Mok said she did not know the full extent of what Yang Yin had done "until it was too late".ST PHOTO: JAMIE KOH

Yang stood nervously in silence next to a court interpreter as Principal District Judge Bala Reddy took about 30 minutes to read out his grounds of judgment.

He said Yang had preyed on the vulnerability of Madam Chung, and embarked on his "criminal enterprise" shortly after he came to live in Singapore in 2009.

"Preying on the vulnerability of an elderly lady, very advanced in age, the accused bamboozled Madam Chung into entrusting him with substantial sums of monies for purposes that he never intended to fulfil," said Judge Reddy.

Yang had met Madam Chung in 2008 when he acted as her private tour guide during a trip to Beijing. The widow, whose husband died in 2007, is childless and was diagnosed with dementia in 2014.

Some time around January 2010, Yang persuaded her to purchase a horse painting by renowned Chinese artist Xu Beihong. She then agreed to entrust him with a sum of half a million.

The painting, however, was never bought. Yang procured a fake painting and a falsified receipt to cover up his wrongdoing.

Yang likewise procured two falsified receipts that showed he had purchased five paintings for close to $600,000 in 2012.

Judge Reddy said the sentence meted out must be one that reflects the total amount of money misappropriated, as well as one that takes into account various aggravating factors in the case.

The jail term of 10 to 12 years that the prosecution asked for would be "particularly crushing", said the judge, citing past cases in which the jail terms handed out were lower than that even though larger amounts were misappropriated.

Madam Chung and her niece arrived in court with six friends and neighbours yesterday. Many, including Madam Mok, left feeling disappointed with the outcome.

"What he stole was not only money... he actually took away her dignity," the travel agency owner told reporters outside the court house. "He didn't do what he was supposed to do, (that is) look after her. He didn't do that... he didn't look into her welfare and it's totally disappointing."

Asked if the prosecution would be appealing, a spokesman for the Attorney-General's Chambers said the prosecution will study the full written grounds of decision before deciding on the next appropriate course of action.

Both the prosecution and Yang's lawyer have 14 days to file the notice of appeal.