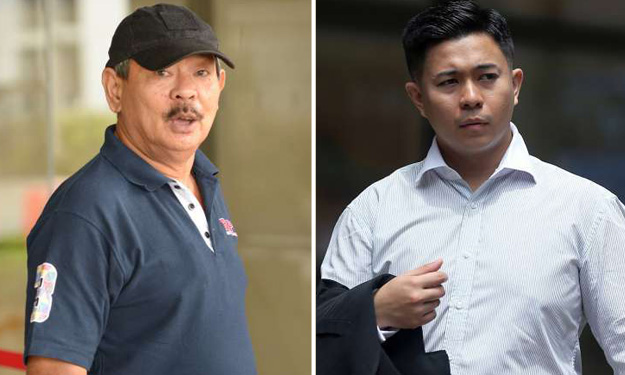 A man accused of raping a teenage girl after posing as a policeman said the lift technician who asked to see his police warrant card was a "pervert".

Muhammad Firman Jumali Chew, 30, said that on the day of his alleged offences, he found Mr Tung Shue Kiong crouching at the stairwell on the 12th floor of Block 362, Woodlands Avenue 5, touching himself while the teenage couple were having sex.

He said it was not the first time Mr Tung had done so, and cited a previous encounter where he had caught the 57-year-old man "peeping at somebody".

Firman, taking the stand yesterday, also said that, after his arrest, he told the police his "conscience is clear" but was tortured by two officers, who "bashed" him against the wall, then stripped him naked and poured ice water on him.

Breaking down in court, he added that the officers showed him a CD of surveillance footage as well as a DNA report, and asked him to confess to the crimes.

As for the 16-year-old girl, he said she had initiated physical intimacy and performed a sex act on him but he pushed her away "gently" when she wanted to sit on him.

Firman, a former pizza delivery man now working as a fire safety consultant, faces one charge each of rape, sexual assault and impersonating a police officer.

He allegedly committed the offences on Oct 9, 2013, and was arrested two days later, after his identity was established from DNA samples taken from the girl's clothes.

Yesterday, Firman gave a version of events completely at odds with those given by the alleged victim, her then boyfriend, and Mr Tung.

The prosecution's case is that after observing the teen couple having sex, Firman told them he was a policeman and asked for their identity cards. He then sent the boy away before taking the girl to a nearby block, where he raped her.

Mr Tung said he sensed that something was amiss when he saw Firman and the girl. He searched five blocks of flats, and eventually found Firman and confronted him at Woodlands bus interchange.

But Firman painted Mr Tung as a dubious character who has a habit of loitering suspiciously around the neighbourhood. He said on the day in question, he was on his motorcycle when he spotted Mr Tung. He said he parked his motorbike and tailed Mr Tung, who took the stairs.

Firman, who was captured on surveillance video walking backwards into the lift, said he took the lift to the 12th floor. He spotted Mr Tung on that floor and, later, he stumbled on the couple as he walked down the stairs. Firman said Mr Tung left the stairwell when Firman said "there are police officers around".

Firman said he asked the couple for their age and they showed him their identity cards. The boy then left, leaving Firman alone with the girl. Firman said she asked him to accompany her home and when they were at Block 359, told him to walk up the staircase with her.

After telling him that she "used to go around these blocks doing sexual activities", she moved in to kiss him and touched his groin. He was "shocked", he said.

After Firman's arrest, police extracted 46 images from his phone, most of which were screenshots of Internet searches on rape.

He said his wife had used his phone to research the topic as she had been raped after his friend had spiked her drink. Firman is expected to be cross-examined by the prosecution on Tuesday.