Man slapped with $6.6 million fine and 38 months of jail for duty-unpaid cigarettes 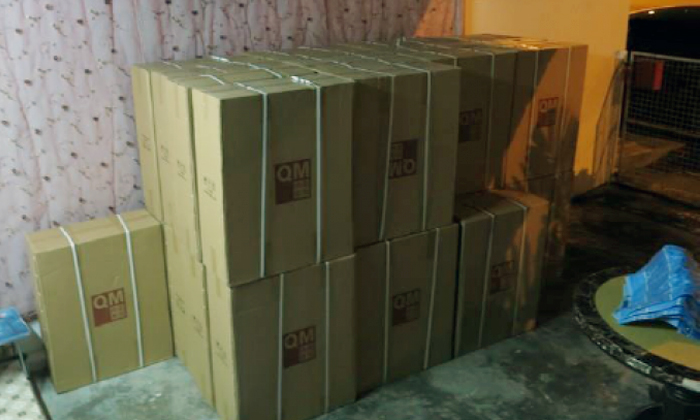 A 61-year-old Singaporean man was slapped with a $6.6 million fine and a 38-month jail sentence on Thursday (Sept 1) for dealing in duty-unpaid cigarettes.

The $6.6 million fine is the highest fine handed down by the State Courts so far this year for duty-unpaid cigarette-related offences, said a Singapore Customs spokesman.

If he cannot pay the fine, Abdul Rashid Abdullah will have to serve an extra 22 months on his sentence.

On Wednesday (Aug 31), Singapore Customs received a tip-off about contraband cigarettes being stored in a terrace house in Upper Paya Lebar Road.

Investigations showed that the house was rented by Abdul Rashid to stash the cigarettes.

He was convicted of a similar offence in 2008 and sentenced to three years in jail.

Offenders can be fined up to 40 times the amount of duty and GST evaded, and/or jailed for up to six years, said Singapore Customs.

The minimum court fine for first-time and repeat offenders of tobacco-related offences is $2,000 and $4,000 respectively. Repeat offenders who are caught with more than two kg of tobacco products will also face mandatory jail sentences.

Related Stories
More than 3,000 cartons of contraband cigarettes seized by ICA officers at Jurong Port
ICA foils 3 bids to smuggle over 4,000 cartons of contraband cigarettes at Jurong Port
More than 1.4kg of drugs seized from Malaysian female motorcyclist at Woodlands Checkpoint
3 arrested and more than $65,000 worth of heroin found at Woodlands Checkpoint
More About:
illegal
smuggle
smuggling