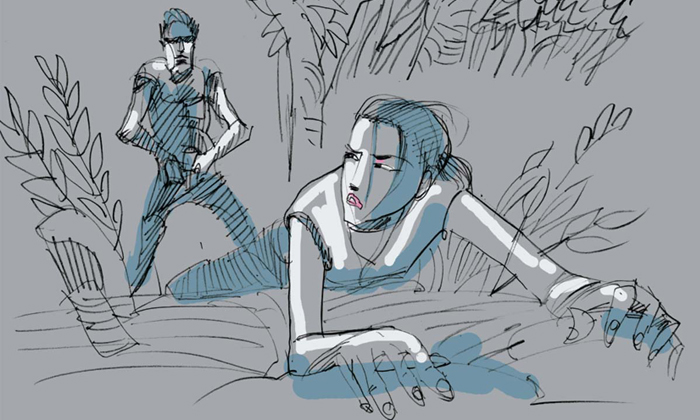 They met for the first time at a New Year's Eve party at the D'Kranji Farm Resort in Lim Chu Kang on Dec 31, 2014.

The single mother, then 30, who has a four-year-old son, had been invited to the celebration by her cousin.

Muhammad Farhan Mohamed Buan, then 28 and working as a mover, was also at the party with his wife and children.

But that did not stop the father of three from preying on the woman and sexually assaulting her. During the attack, she feared for her life, but her desperate struggles and pleas for him to spare her fell on deaf ears.

He also sentenced Muhammad Farhan to two months' jail for insulting her modesty, with the two sentences to run concurrently.

At about 5.45am on New Year's Day, Muhammad Farhan approached the woman as she was resting at a pavilion outside a chalet.

They started chatting, and she asked him for a few puffs of his cigarette.

Muhammad Farhan agreed, then asked her for sex in exchange for the favour. She declined, and told him to return to his wife and children.

But that did not discourage him. Instead, he told her that his wife was asleep and continued to stay with her at the pavilion.

The woman later told him that she was tired and wanted to take a taxi home, but she had no money.

When she asked Muhammad Farhan if he could help her, he forcibly kissed her, then pulled down his pants and exposed himself.

Feeling insulted, the woman scolded him and tried to leave after he offered her $10 for the taxi ride.

He told her that it was not safe to walk alone outside the resort at that time, and offered to accompany her. She accepted his offer.

At about 6am, they set off near a forested area towards the junction of Neo Tiew Road and Neo Tiew Lane 2.

Muhammad Farhan then handed her the $10 before telling her that he had heard voices coming from a nearby bush and suggested that they check it out.

Sensing something was amiss, the woman asked if he was crazy, and tried to walk back to the resort.

But he grabbed her and wrapped his hands around her body before lifting her up and carrying her into the forested area.

While carrying her, he jumped across a large drain. He then threw her onto a grass patch.

The woman struggled and kicked him repeatedly, but she did not have the strength to fight him off.

Terrified that she was about to be raped, she tried to scare him off by lying that she had Aids.

But Muhammad Farhan was undeterred.

He pulled off her pants and underwear, and raped her just as she was attempting to get up from the ground.

While she was being violated, she kept pleading for him not to harm her as she had a son to look after.

After the rape, Muhammad Farhan gave her another $15, and told her not to tell anyone about the rape before walking away.

Still fearing for her life, the woman accepted the money, put on her clothes and walked back to the road.

She then hailed a passing taxi, and the driver called the police with his mobile phone after she told him that she had been raped.

As they were waiting in the taxi, they saw Muhammad Farhan walking towards the resort and followed him slowly in the taxi.

When Muhammad Farhan returned to the resort, his wife questioned him about his dishevelled state. In tears, he confessed that he had just done something wrong.

Muhammad Farhan was arrested shortly after at the chalet, and has been in remand since Nov 25 last year.

For rape, he could have been jailed for up to 20 years, with caning and a fine.

DPP: He is a risk to society

Muhammad Farhan Mohamed Buan brazenly preyed on the victim, boldly propositioned her for sex, then raped her when she dismissed his advances, said Deputy Public Prosecutors (DPP) Kavita Uthrapathy and Eunice Lau in their sentencing submissions.

The DPPs pointed out that the aggravating factors included the "fear and degradation" felt by the victim as she was raped, and his "continuous and callous" actions despite her cries that she was a single mother with a son to care for.

Muhammad Farhan also showed reckless disregard for the victim's health and physical well-being, exposing her to the risk of an unwanted pregnancy.

He flippantly handed $15 to the victim after the rape, and left her in a fearful and traumatised stage, the DPPs told the High Court yesterday.

"The entire incident might have represented minutes of sexual pleasure for the accused, but those same few minutes have exacted an irretrievable physical and emotional impact on the victim," said DPP Kavita.