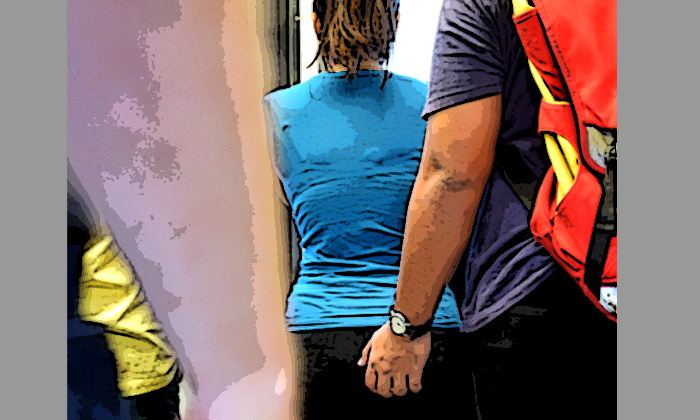 A restaurant crew leader who molested a woman on an MRT train was jailed for six weeks on Thursday (Oct 6).

Indonesian national Sasmita Tjakra, 41, who is a Singapore permanent resident, pleaded guilty to brushing himself against the 27-year-old woman's right buttock inside an MRT train travelling from Yishun towards Khatib on April 5, 2016.

Deputy Public Prosecutor Chew Xin Ying told the court that the victim boarded the train at Admiralty station that morning and stood near the gangway area.

When the train pulled into Yishun, she moved to stand in front of a set of two-seater. She then felt something hard touch her buttock. She turned around and saw Tjakra standing directly behind her. He then tried to use his bag to cover his trousers.

Shocked, the victim did not confront him immediately, but used her mobile phone to take a photo of his face. She managed to capture only half of his face.

Tjakra left the train at the next stop, Khatib.

The victim made a police report at Geylang Neighbourhood Police Centre the same day.

Tjakra admitted that he had deliberately positioned himself behind the victim because he found her attractive and was aroused. He intentionally brushed his groin a few times against her right buttock.

In mitigation, Tjakra said he cooperated with the police and had resigned from his job. He also regretted what he had done.

He could have been jailed for up to two years, fined, caned or received any combined sentence.

Related Stories
Man who lifted housemate's blanket while she was sleeping naked jailed for 12 weeks
22-year-old admits touching his sisters' breasts and stripping naked in front of them when he was aroused
Engaged man kisses nurse taking care of his mum -- then touches her breast and slaps her buttock
JC student 'felt an urge' to molest 8-year-old girl after seeing her in ballet attire
More About:
molest
MRT
pervert
inappropriate
crime
jailed
courtroom
brushing buttock