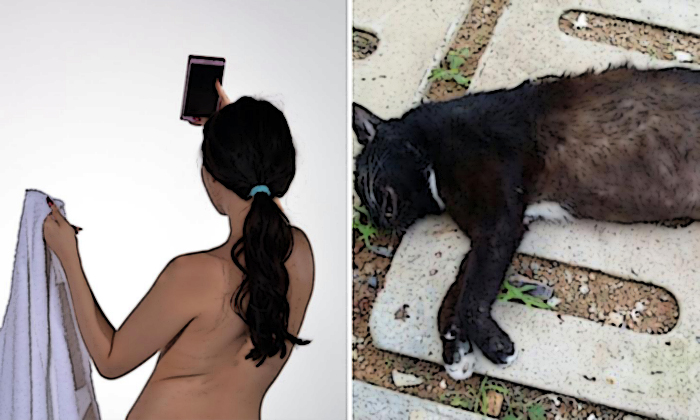 He wanted to tarnish a telco employee's reputation because he was unhappy with her service.

So, David Daniel Liu Fu Long, 39, sent e-mails of what he claimed were naked pictures of the 48-year-old woman to her and her colleagues.

A few days later, he e-mailed the woman pictures of dead cats.

Three other charges to do with harassment were taken into consideration.

Liu was sentenced to 13 weeks in jail.

The court heard that on Aug 6 this year, at around 1am, Liu, who was unemployed, sent an e-mail that identified the woman by name and organisation to her and her telco colleagues, including senior management.

Enclosed were nine images of nude women labelled with the woman's name, which Liu claimed were pictures of her.

He also said that the woman could be seen "naked several times a day in her house".

Later that morning, the woman and her colleagues received a second e-mail from Liu containing nine images of nude women engaging in bestiality.

Liu again claimed that the photos, which were labelled with the woman's name, were of her.

While none of the photos in the e-mails was of the woman, the explicit and defamatory content caused her great distress and embarrassment and she lodged a police report that night.

During the course of investigations, Liu admitted that he had sent the e-mails as he was unhappy and angry with the telco-related service he had received from the woman.

Four days later, she told the police that she received another obscene e-mail containing gruesome and intimidating material, which was also sent to her colleagues.

Investigations revealed that the e-mail, sent on Aug 9, had two images of disembowelled cats.

It said that one of the cats might enter hell as retribution for its bad deeds, and the woman should be quarantined for sharing the same name as the cat.

The woman interpreted it as a death threat and felt extremely disturbed and intimidated.

Liu admitted to sending the e-mail as he was unsatisfied at not receiving a reply to the previous e-mails sent.

He also intended to threaten the woman and her colleagues.

In a separate case, in July 2015, he impersonated a 44-year-old female doctor whom he had met and sent her colleagues an e-mail containing insulting content in her name.

He had created an e-mail address meant to resemble the doctor's work e-mail.

The e-mail he sent stated that the doctor was a prostitute, a secret society gang member, an Institute of Mental Health patient and that she should resign and be imprisoned.

Five years ago, he was jailed for nine months for sending a bomb hoax via a fake e-mail account to 84 Members of Parliament, including Prime Minister Lee Hsien Loong.

Related Stories
18-year-old Australian model shocked to see her nude photo from 2 years ago on porn website
Woman puts BF's ex-girlfriend's nude photos online after finding them on his laptop
Man first to be convicted for unlawful stalking: He put up teen's nude photos on FB and at public places
Man took upskirt photo of army mate's GF and threatened to upload if she did not send a nude pic
Man asks intellectually disabled woman to be his GF and gets her to send topless photo -- then gives it to friend to upload on Facebook
Sick trend of women posing naked at public places in S'pore continues
More About:
nude
harassment
naked
dead
cat
animal abuse