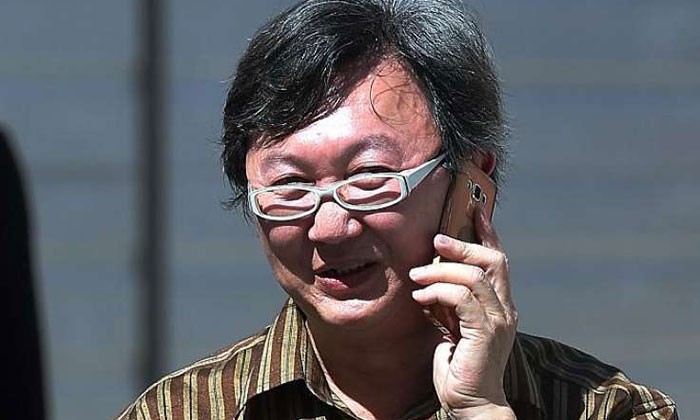 Chia Hwa Beng accidentally cut his wrist while fleeing the scene at Mount Elizabeth Hospital in Orchard Road in August 2008, leaving blood stains on the floor.

He was not identified as the culprit of the crime until police took his DNA sample in May last year.

Yesterday, Chia, now 50, was jailed for 33 months and fined $30,000, after he pleaded guilty to one charge each of robbery and assisting an unlicensed moneylender. Chia, who was at first charged with armed robbery, escaped the mandatory six strokes of the cane for his reduced charge as he is 50.

A district court heard that his victim, a 58-year-old woman, had accompanied her mother-in-law to a cardiology clinic at Mount Elizabeth Hospital on Aug 18, 2008.

At about 4pm, she left the clinic to use the toilet.

"At that time, Chia had consumed "ganja" (a street name for cannabis), and he was feeling desperate as he had large debts and his creditor was harassing him and asking him to pay up," said Deputy Public Prosecutor (DPP) Chong Yong.

When she opened the door, Chia pushed her and demanded for her belongings in Mandarin.

The victim pretended to faint, hoping that someone else would enter the toilet and help her.

As she lay on the toilet floor, Chia pulled at her handbag but she resisted. She then saw Chia holding a 13cm long stainless steel blade. Fearful, she gave him her $3,000 Rolex watch.

Chia also demanded her diamond ring, just as a nurse entered the toilet. Panicking, he snatched the woman's handbag containing $1,650 in cash and fled in a cab. The total value of the items he took was $5,580. He did not get the ring.

The court also heard that in April 2014, Chia's vocational taxi driver's licence was suspended for three months. "As he could not find any job during that time, he picked up gambling and would go to gamble on a ship three to four times a week," said DPP Chong.

He took loans from several loan sharks and racked up debts.

The punishment for robbery is between two and 10 years' jail, with at least six strokes of the cane; and for assisting an unlicensed moneylender, for a first conviction, a fine of between $30,000 and $300,000, and up to four years' jail.