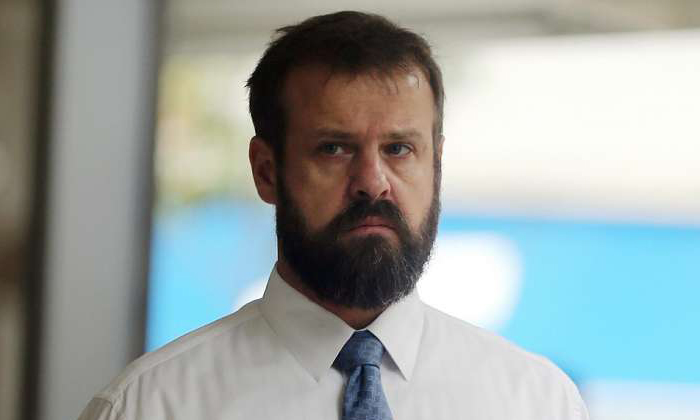 A company director was fined $2,500 on Tuesday for hurting a teacher in a fast-food restaurant more than two years ago.

New Zealander Stefan Paul Afendoulis, 48, who is a Singapore permanent resident, was ordered to pay compensation of $57 to Mr Toh Peng Hwee for his medical expenses.

Afendoulis had initially claimed trial to causing hurt to the victim, who is in his 40s, at SAFRA Yishun McDonald's restaurant by grabbing his neck and knocking his head repeatedly against a wall.

After a seven-day trial, Afendoulis pleaded guilty on Nov 18, 2016 to a court amended charge that he grabbed Mr Toh's neck and pushed him against a wall at about 8am on Aug 12, 2014.

The court had heard that a commotion broke out after Mr Toh had accidentally bumped into Afendoulis who then held the victim's neck against the wall.

There was an exchange of words and shouting. Afendoulis stopped only because other parties including his wife had shouted at him.

Submitting for a fine to be imposed earlier, Deputy Public Prosecutor Michael Quilindo highlighted that there was absolutely no basis or reason for Afendoulis to have behaved in the way he did against a complete stranger.

"His actions were disproportionate to any perceived threat and the prosecution submits that the accused's claims of acting 'defensively' should be wholly rejected," he said.

DPP Quilindo said the incident in a public place caused a great disturbance and the restaurant manager had to step in to defuse tensions.

He submitted that although the victim's injuries were not particularly severe, Mr Toh was "throttled" at the neck which caused him to have difficulties breathing. He was attacked at a vulnerable part of the body with no chance of retaliation.

The prosecutor also said Afendoulis showed no remorse immediately after the incident and flaunted his wealth to the victim in being able to hire a lawyer. The prosecution witnesses had testified that he had an arrogant tone when he boasted of this.

Afendoulis' lawyer Shashi Nathan said his client, a father of two, would be willing at the outset to plead guilty to the present amended charge. He was forced to claim trial because the charge had stated that he repeatedly knocked the victim's head against the wall.

He said his client was engrossed with reading the e-mails on his phone when he suddenly collided into the victim, and they were involved in a "tangling of legs".

He said the victim shouted at his client, who grabbed the victim's neck and pushed him against the wall to hold him there as he believed that the victim was about to assault him.

The maximum penalty for causing hurt is two years' jail and a $5,000 fine.