Malaysian tycoon's children in legal tussle over 4 firms, one of which holds 32 units in Bukit Timah Shopping Centre worth $68 million 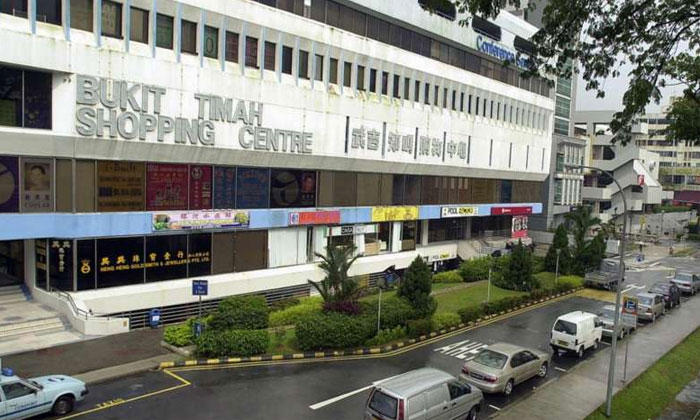 The children of a Malaysian property tycoon are tussling in the High Court over four family-owned companies, one of which holds 32 units in Bukit Timah Shopping Centre valued at about $68 million.

Eight daughters of the late Mr Loong Yoke Phin are minority shareholders in the four companies and have sued their only brother and his sons, as well as another sister, for oppression.

The eight sisters, aged 54 to 64, are seeking to cash out their stake either by selling their shares to the defendants at a price to be determined by independent valuers or by winding up the companies.

Among other things, they allege that the majority camp - their brother Long Shin, 66, his four sons, and third sibling Sweet Ying - had excluded them from management of the companies and had denied them dividends from the rental income of more than $5.4 million.

Sweet Ying - who had a 6.23 per cent shareholding like her sisters - died of cancer at age 62 on Jan 14, a week after the lawsuit was filed. Her son has been named as a defendant in her place.

The defendants, represented by Senior Counsel Lok Vi Ming, contend that the suit amounts to an "abuse of process" as the family disputes were resolved in a settlement agreement signed in June last year.

But the plaintiffs disagree, arguing through their lawyers from Lee Bon Leong & Co that the document was just an interim agreement, and they still had the right to file proceedings if the parties failed to reach a final settlement.

A hearing to determine whether the 2015 agreement is legally binding started yesterday.

The eight sisters have filed similar proceedings in Malaysia to deal with the firms and properties there.

The late Mr Loong arrived in Singapore from Malaysia in the late 1960s and made his fortune in construction projects, including Bukit Timah Shopping Centre.

He set up two firms to hold his property investments here. The main company, Long Win Investment, collected rental income from 32 units in the shopping centre. It also has two wholly owned subsidiaries, in furniture retail and warehousing. He also set up Long Win Realty but most of its assets have been sold.

The patriarch willed larger stakes in the firms to his wife and son, rather than his daughters. The matriarch gave her shares to her son before she died in 2014.

The eight sisters claim that after their father's death in 2008, their brother and third sister had majority control, and ran the companies to benefit themselves.

But the defendants say the firms, while family-owned, were never meant to be family-run. When he was alive, the patriarch made all final decisions and made it clear to his children that there could be "only one tiger on any mountain".

He had instructed his son to take charge after his death and told his daughters to support their brother.

The defendants say the patriarch wanted his business to continue after his death and never intended his companies to be wound up.