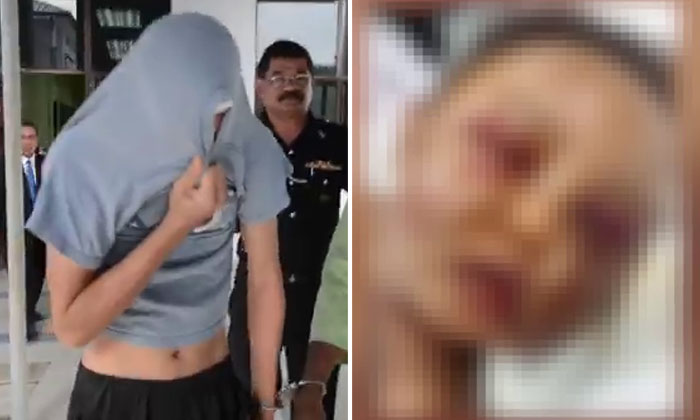 Upon getting charged with the murder of a toddler, a jobless man appeared expressionless after the body was recently found stuffed into a cooler box.

According to a report by The Star, Mohd Affandi Fauzi Ramlee, the culprit, merely nodded when the charge was read out to him in Malay by a court interpreter.

From Taman Sri Wang, Sungai Petani, the 34-year-old was charged with murdering the toddler between 8am on Oct 27, and 2am on Nov 24, at a flat in Paya Nahu.

As he was led from the lockup to the magistrate's court on Tuesday (Dec 6), the report notes that Mohd Affandi shielded his face from the press by pulling his light blue T-shirt over his head.

Mohd Affandi, who was arrested on Nov 24, was unrepresented in court. He has been in remand since then.

No bail was offered as the offence carries the mandatory death sentence upon conviction.

The case was only uncovered last month after the 26-year-old mother of the four-year-old ran to her neighbour for help while cradling her critically injured daughter.

Following a report, police discovered the decomposed body of the boy in a cooler box when they visited the flat on Nov 24.

The boy's body was found wrapped in a thin mattress, placed in the cooler box and covered in ice.

The girl, who was suspected to be abused, suffered from a broken collarbone and bruises.

Mohd Affandi and the mother of the kids were tested positive for drugs and were remanded to facilitate investigations.