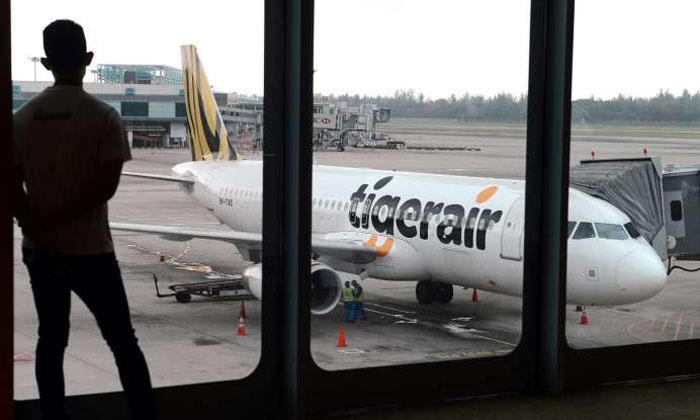 A 57-year-old hairstylist who assaulted a flight stewardess on board a tigerair plane in February was jailed for five days on Wednesday (Aug 24).

Chong Nyok Kiew, a Malaysian, pleaded guilty to one charge of causing hurt.

A district court heard that Chong flew from Kuala Lumpur, Malaysia, to Singapore on Feb 23.

Before the flight departed, stewardess Veronica Siau Yen Ting, 26, told passengers seated in two rows that she had placed a pair of crutches belonging to a passenger in the overhead compartment in their area.

Ms Siau also told the passengers to be careful when using the overhead compartment.

After the flight landed at Changi Airport, passengers opened the overhead compartments to retrieve their belongings.

But one passenger caused one of the crutches to fall onto Chong, and she began complaining loudly about the incident.

She kept repeating loudly, in Mandarin, that she "wanted to know how the cabin crew would answer for this" and that "sorry was no cure", the court heard.

Shortly afterwards, Ms Siau went to get the crutches to return them to their owner. She also apologised to Chong.

Later, as passengers were walking out of the plane, Chong went up to Ms Siau and demanded that the flight stewardess explain why the crutch had fallen on her. Chong also demanded compensation.

Ms Siau told Chong to move aside to allow other passengers to get out of the plane. However, Chong continued to block the passage and prevent others from leaving the aircraft.

Ms Siau apologised to Chong again and asked her to calm down. But Chong responded by punching Ms Siau once each on her left cheek and her shoulder.

The flight stewardess then told the pilot to call the police, while another Tiger Airways staff prevented Chong from leaving the plane.

While waiting for policemen to arrive, Chong kept saying: "I hit a person and you call the police. Something hit my head, nothing happens. Now, I punch her, it's fair."

In mitigation, Chong's pro-bono lawyer Noor Mohamed Marican told the court that she had a string of medical conditions.

She has morbid obesity, with a body mass index of 48.5, hypertension, osteoarthritis and a weak bladder.

Chong is also unable to squat or kneel, and she cannot stand and walk for prolonged periods.

As a result of her medical problems, she is now unemployed.

The lawyer asked that she be spared a jail term.

For voluntarily causing hurt, Chong could have been jailed for two years and fined $5,000.

Related Stories
Woman suing SIA in Australia for injury sustained on flight
Man rests feet on plane wall -- then asks 'why' when stewardess tells him not to do so
More About:
crime
violent
courtroom
assault
flight
airport
airline