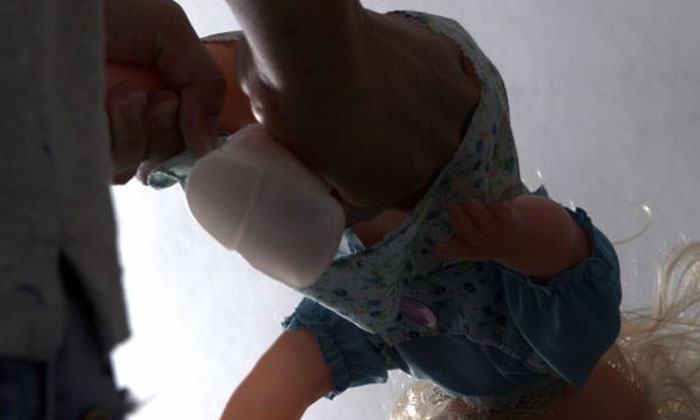 She slapped the four-month old baby's face, pushed him against the sofa, and repeatedly slapped and punched his sole.

She also used her index finger to forcefully push the left side of the baby's face.

Yesterday, the 38-year-old maid was jailed for two months after pleading guilty to one count of ill-treating the child.

The abuse, which lasted three minutes and was captured on a closed-circuit television camera installed in the employer's flat, happened on April 25.

The maid, a Filipino, cannot be named due to a gag order.

The court heard that the baby's mother, a 39-year-old housewife, had employed the maid to take care of her four children and do household chores.

In the afternoon of April 25, the mother left her youngest child, the infant, in the maid's care while she took her daughter out for a tuition class.

The baby was fast asleep at that time and there was also a CCTV camera installed in the living room of her flat.

The mother was still outside her home at around 2.25pm when she decided to view live feeds of the CCTV footage on her mobile phone to check if her son was awake.

To her horror, she saw her maid physically abusing him on the sofa.

Five days later, the mother made a police report at Bukit Timah Neighbourhood Police Centre at around 11.30am. Court papers did not mention the reason for the delay.

Investigations revealed that the maid, who was not represented by a lawyer, was feeling frustrated at that time and took it out on the baby.

In her mitigation, she told District Judge Low Wee Ping yesterday that she was then under a lot of stress as she had marital problems back home.

The court also heard that she is a mother of four and had worked in Singapore for six years.

The maid also said she had worked for her victim's mother for three years and had a good working relationship with the family.

Before handing out the sentence, Judge Low said the infant was a vulnerable victim who could not voice out his plight.

For ill-treating the baby, the maid could have been jailed up to four years and fined up to $4,000.

Related Stories
Maid pinched and abused 2-year-old -- because his older brother, 9, was 'very naughty'
Maid slapped, kicked and shoved 93-year-old woman she was supposed to be caring for
Maid abuses 14-month-old boy by forcefully dangling him upside-down and slapping him
More About:
child abuse
court
abuse
violent
maid
crime
illegal