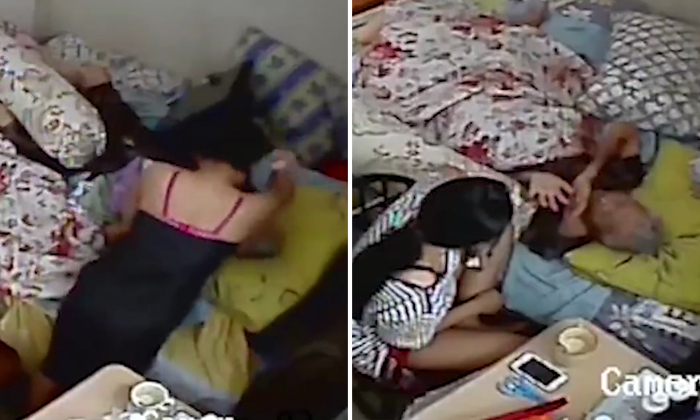 A foreign domestic worker who vented her frustration at her employer's sickly mother by repeatedly assaulting her was jailed for 10 months on Monday (Sept 5).

Murni Panengsih, 25, pleaded guilty to five of 15 counts of hurting the 96-year-old woman at her employer's home in the Lavender district.

Deputy Public Prosecutor Dora Tay said the Indonesian national was engaged around December 2013 to look after the victim. The victim, who was bedridden, had weak kidneys, diabetes and showed signs of dementia although she was not formally diagnosed.

The offences came to light last Sept 17 when the victim's daughter saw the maid hitting her mother while viewing the closed-circuit television (CCTV) installed at the flat.

She confronted the maid and reviewed the past footage from the CCTV. She discovered multiple occasions when the helper had caused hurt to the victim, and lodged a police report.

DPP Tay said the maid was first reprimanded in July 2014 when she was caught hitting the victim's head. She promised she would not do it again.

According to the victim's daughter, she had noticed some bruises on the victim before Sept 17, and the victim had also mentioned that "somebody was trying to kill her". But the daughter thought the victim was imagining things. She also felt that the maid had been doing a good job of looking after the victim and was under the impression that the maid liked the victim.

The court heard that the maid had been abusing the victim since May 2014 to vent her frustration, but she was never ill-treated or threatened by anyone in the family.

On Aug 15 last year, she was feeding the victim with water when she used the water bottle to hit the victim on her lips forcefully. She also pressed the victim's head hard to stop her from moving her head. When the victim tried to touch her own lips after being hit, the maid flicked her hands away.

While feeding her, the maid used her left hand to slap the victim on the face a few times and pressed her head hard into the pillow she was lying on.

Two days later, while feeding the victim, the maid suddenly got up into an elevated kneeling position next to the victim and grabbed her ears and head, and threw the victim's head onto the pillow a few times.

She also used her hands to press hard on the victim's face onto the bed and struck her on the face a few times.

Defence lawyer Diana Ngiam, who acted pro bono for the maid, said psychiatrist Dr John Bosco Lee had diagnosed the maid to be suffering from adjustment disorder, which had contributed significantly to the offences.

She said the maid was tasked with a very difficult job of having to care for an elderly patient with many problems, but it was no excuse for the maid to have reacted the way she did, and the maid accepted that her actions were "reprehensible".

District Judge Low Wee Ping said what was most disconcerting in the case was the victim's advanced age. Such elderly victims, he said, are unable to comprehend or articulate their distress when harm is inflicted on them by domestic workers. He agreed with the prosecution that a deterrent sentence is an important consideration in these cases.

The maximum punishment for causing hurt is two years' jail and a $5,000 fine on each charge.