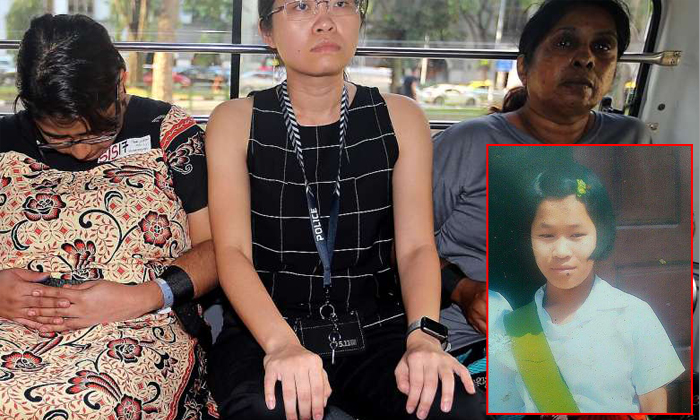 A mother and daughter were yesterday accused of murdering their Myanmar maid.

Housewife Prema Naraynasamy, 58, and 36-year-old Gaiyathiri Murugayan showed little emotion when charged in court with killing Ms Piang Ngaih Don, a 24-year-old mother of a young child, in a ninth-floor flat at Block 145 in Bishan some time between July 25 and 26.

But Gaiyathiri was seen weeping after she spotted family members in the public gallery.

Her husband is believed to have worked in the police force and they have a young daughter.

They live in the flat where the alleged murder took place.

Neighbours were shocked to hear of the arrest, describing the family as just like any other.

Ms Piang, who had been working for the family for about a year, was from the Dimpi Village in Tedim Township, Chin state, in Myanmar.

She is survived by her child, a brother and two sisters.

Mr Suangh Khan Khai, her village neighbour who is now working here as a maintenance coordinator, described Ms Piang as "very quiet" and close to her family.

Before coming to Singapore, she had worked as a construction worker, but quit as the salary was low and she wanted to earn more to support her family, the 28-year-old neighbour told The Straits Times.

Ms Piang, he added, last called her brother this month and told him that she wanted to return home next month. But she was worried about not having enough money for a plane ticket home.

Maids working at the block and residents said they rarely saw Ms Piang, whom they described as short, with short hair, unless she was cleaning the windows or hanging the laundry.

Police said they received a call on Tuesday at about 11am for assistance.

When they arrived, Ms Piang was was found motionless. She was pronounced dead at the scene.

Neighbours saw police cordon off the area and said the body was removed at around 5pm the same day.

Gaiyathiri and Prema were arrested on Wednesday.

Deputy Public Prosecutor Mohamed Faizal said the prosecution was not ready to accept a plea from the pair.

The court allowed his application for the two women to be remanded, with permission for them to be taken out for investigation.

Both women will be back in court next Thursday. If convicted of murder, they face the death penalty.