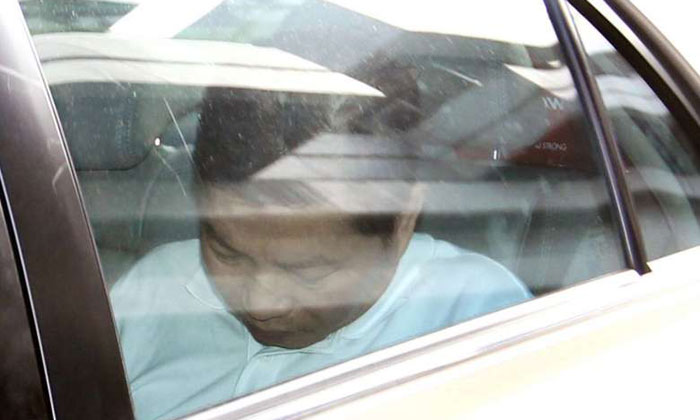 A 56-year-old businessman on trial for murdering his wife's former lover in the back of a borrowed van took the stand yesterday and denied killing the much younger man.

Chia Kee Chen, who faces the death penalty or life imprisonment if convicted of murder, pushed the blame to an individual named "Ali".

Chia told the court that he wanted only to "get back" a thumbdrive containing video clips of his wife having sex with her 37-year-old lover, material analyst Dexmon Chua Yizhi.

Testifying through a Hokkien interpreter, he said he felt "ashamed" after receiving an anonymous call telling him that the victim was sharing the videos with his colleagues.

Chia said that Ali, a Malaysian he had met years ago at a Johor coffee shop, offered to get the thumbdrive for him for RM5,000 (S$1,650).

There is no mention of Ali in the accounts of Chia's two accomplices - his Indonesian worker Febri Irwansyah Djatmiko and his longtime friend Chua Leong Aik.

Chua, 67, drove the van but got out, afraid, when he heard sounds and shouts coming from the back. He is serving a five-year jail term for abduction and causing grievous hurt.

Febri said Chia had sought his help to kill a person who had raped his wife. He is wanted by police here but remains at large as Singapore has no extradition treaty with Indonesia.

In contrast, Ali played a vital role in Chia's version of the events surrounding the victim's death between the night of Dec 28 and the early hours of Dec 29, 2013.

Chia said Ali had assured him that he could get the thumbdrive by the end of December.

As for the van, Chia said he had borrowed it on Dec 28 to help Febri transport some fish.

Chia said Febri and Chua were in the van when he received last-minute instructions from Ali to drive to a multi-storey carpark near the victim's Choa Chu Kang flat and park in a specific space.

In the carpark, Ali appeared with his own van, he said.

Some time later, after the victim had parked in the adjacent space and got out of his car, Ali grabbed hold of his neck and pushed him into the back of the van, said Chia.

Chia said he and Febri got into the back as well, while Ali closed the sliding door and instructed them to drive to an army camp in Lim Chu Kang.

Chia said that inside the van, Febri and the victim fought, kicking each other. He said he kicked the victim once in retaliation when the victim kicked him.

Chia said he asked the victim for the thumbdrive but the victim said he did not have it. In his account, he took over the wheel after Chua fled, leaving Febri alone in the back of the van. He said they were fighting but he could not tell who had hit whom.

Chia said he drove to a traffic junction near the camp. Ali then arrived in his van and said he wanted to tie the victim to a tree.

After Febri and Ali dragged the victim to Ali's van, Chia drove away with Febri, he said.

"I just wanted to get the thumbdrive back, the rest of the things I didn't want to know," he said.

Chia said Ali also told him to meet at Lim Chu Kang later that morning to see if he managed to get the thumbdrive. But Ali did not show up, he said.