Legless body in suitcase: Brutal murder suspected to be over card game 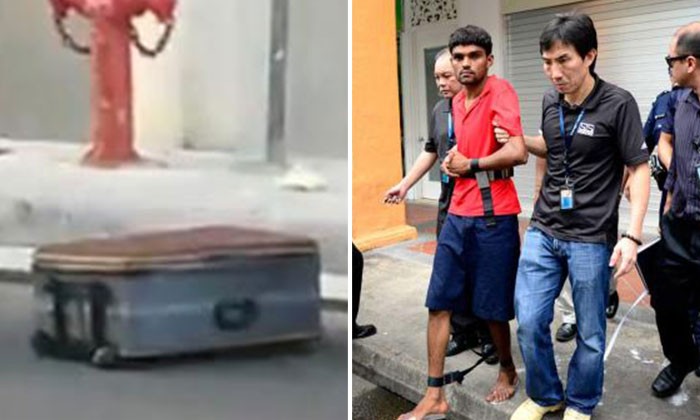 He won money from his two housemates after beating them in a game of cards.

But the win may have cost Mr Muhammad Noor, 59, his life.

The legless body of the Pakistani national was found stuffed inside a suitcase found at Syed Alwi Road in Little India at about 6pm on June 11, 2014.

The police later found another suitcase containing his dismembered legs at a nearby Muslim cemetery.

The trial of Rasheed Muhammad, 45, and Ramzan Rizwan, 27, who are also from Pakistan, started in the High Court yesterday.

The New Paper previously reported that the three men hailed from the same village in Pakistan and came to Singapore to sell tissue paper.

Rasheed and Mr Muhammad Noor shared a room while Ramzan stayed in another room.

Some time before June 11, 2014, the trio were gambling with cards and Rasheed and Ramzan lost some money to Mr Muhammad Noor, said DPP Ong.

It was not mentioned in court what game they were playing or how much money the victim had won.

Some time past midnight on June 11, they allegedly met outside Mr Muhammad Noor's room and discussed how to attack him.

They entered the room and Ramzan allegedly grabbed a shirt hanging on the back of the door and pressed it against Mr Muhammad Noor's face.

They continued pressing on the victim's mouth, nose and neck until he became motionless, said DPP Ong.

Between 9am and 11.15am, Rasheed and Ramzan went to Mustafa Centre, where Rasheed bought a grey luggage bag and an electric jig saw, said DPP Ong.

They went back to Rowell Road, where they bought a bow saw and some rubbish bags.

They returned to Mr Muhammad Noor's room and allegedly sawed off both his legs at the upper thigh.

They allegedly packed the legless body and the legs in separate rubbish bags.

The body was stuffed into the grey luggage bag.

Between 11.45am and 11.56am, they returned to Mustafa Centre and bought another luggage bag - a black one - before going back to the room, where they allegedly stuffed the legless body into the bag.

At 12.25pm, they allegedly left the room with the two luggage bags.

Ramzan went to the Jalan Kubor Muslim cemetery and left the black luggage bag which contained the legs there.

He went to look for Rasheed, who was pulling the grey luggage bag along Syed Alwi Road towards the cemetery.

But the wheels of the bag broke, so the two men tried lifting it.

Blood started dripping out of the bag, prompting them to abandon it on Syed Alwi Road, said DPP Ong.

The bag was discovered by an 81-year-old man, who tried to push it towards a police station.

Some passers-by tried to help him, only to discover a body inside, and the police were called.

Ramzan and Rasheed were arrested the next day and Rasheed led the police to the Muslim cemetery where officers recovered the bag with the legs, said DPP Ong.

The prosecution will produce evidence from 66 witnesses, including forensic pathologists, a fingerprint expert, doctors and police officers, over the 10-day trial.

If convicted of murder, they will face the death penalty.

After he was arrested and placed in a lockup, accused Ramzan Rizwan allegedly tried to take his own life, the court heard yesterday.

This was mentioned when his lawyer, Mr R.S. Bajwa, cross-examined Assistant Superintendent (ASP) Tan Boon Kok during a trial within a trial to determine if Ramzan's statement to the police on June 18, 2014, could be admitted as court evidence.

Mr Bajwa asked the police officer if he knew whether Ramzan had attempted suicide by placing a T-shirt around his neck and pulling at it in the police lockup that morning, a week after his arrest for murder.

When ASP Tan said yes, Mr Bajwa asked him why he had still proceeded to record Ramzan's statement hours after the suicide attempt.

ASP Tan said it was to verify what had happened, adding that Ramzan told him he had done the act to get the attention of the lockup's officers, who he said had ignored him.

He also said the police had assessed Ramzan's condition before continuing with investigations.

Mr Bajwa told ASP Tan that Ramzan was then suffering from a depressive disorder of mild severity, a condition that was only later diagnosed by a psychiatrist.

He asked ASP Tan: "With that knowledge now, would you have proceeded to take a statement then?"

The officer replied: "In hindsight, with this knowledge, I may not (have proceeded) to record the statement. I would have referred him for psychiatric help."