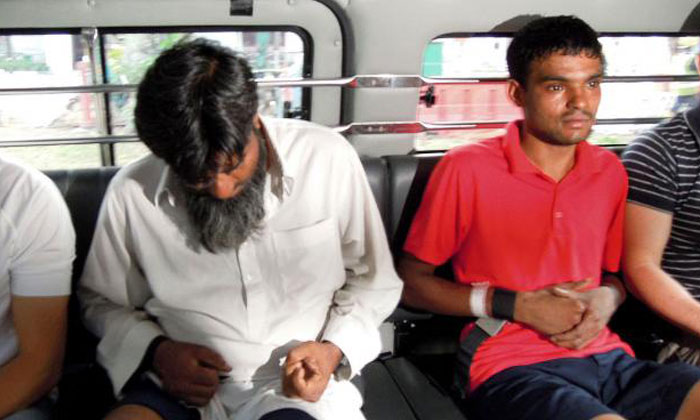 After he was arrested for the murder of a compatriot whose legless body was found in a suitcase in Little India, one of the two Pakistani suspects denied being involved in getting rid of the body, claiming that he was at Geylang Serai Market selling tissue paper at the time.

But days later, when police confronted Ramzan Rizwan with surveillance footage which captured him and his accomplice Rasheed Muhammad with a suitcase, he admitted he had lied in some parts of his original story.

Ramzan, 27, and Rasheed, 45, are on trial for murdering Muhammad Noor, 59, at their lodging house at Rowell Road in Little India on June 11, 2014. All three had come to Singapore from Pakistan to sell tissue paper.

Prosecutors allege that Rasheed and Ramzan had smothered the victim to recover money they had lost to him in a game of cards. The victim's upper body was found in a grey suitcase along Syed Alwi Road.

After the duo's arrest, Rasheed led police to a black suitcase at the Jalan Kubor Muslim cemetery containing the victim's legs, which had been sawn off at the thigh.

In various police statements, Ramzan distanced himself from the killing and fingered the other man. While he admitted pressing a shirt over the victim's face, he said he ran away while Muhammad Noor was still alive.

Ramzan said Rasheed later told him to go with him to buy a suitcase to dispose of the body, but he refused.

Ramzan said the next morning, he left for the Geylang Serai Market to sell tissue paper.

Rasheed called him many times, asking him to go back, but he refused.

He said he did not know what Rasheed had done to the victim.

But a surveillance camera at the junction of Verdun and Syed Alwi roads captured both men pulling a suitcase they had bought from the nearby Mustafa Centre.

About half an hour later, Ramzan was captured on another surveillance camera at the junction of Rowell and Kampong Kapor roads pulling a suitcase.

When he was shown still pictures of the footage, Ramzan changed his story in a statement on June 18, 2014.

The statement was admitted in court yesterday despite a challenge by his lawyer, R. S. Bajwa, that it was not admissible as his client had been induced with the promise that he would not face the death sentence.

In this statement, Ramzan said the part of his original story in which he said he had run out of the room was not true. He said he and Rasheed had overpowered the victim together - he pressed a shirt against the victim's face while his older accomplice strangled the victim with a string.

Ramzan said the victim, who shared a room with Rasheed, shouted but they continued their attack until he stopped moving.