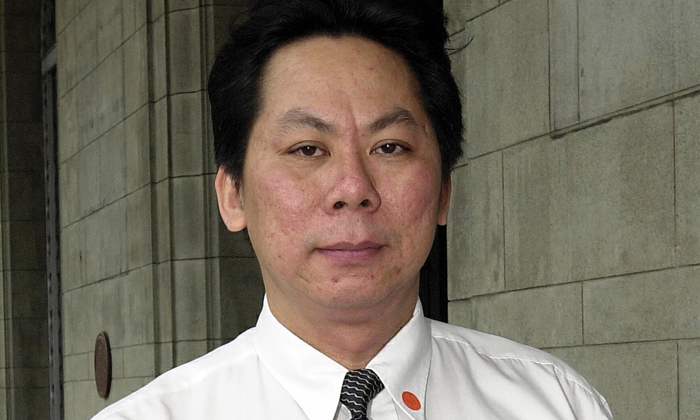 A district judge had harsh words for a lawyer who focused on the breast size of a molest victim, even asking her to stand up while she was on the witness stand and staring inappropriately at her.

Mr Wong, who is in his late 50s and runs his own firm S Y Wong Law Chambers, had defended Xu Jiadong, 24, a student from China, who had brushed his forearm against the breast of a 22-year-old woman on board a train at Toa Payoh MRT station on July 9, 2014.

Xu was found guilty of his single charge of outrage of modesty on Wednesday (Aug 3) by Judge Ho, and was jailed for five months.

"Sacrosanct is our right to travel on public transport unmolested," said the judge in his 44-page grounds of decision released on Thursday (Aug 4). He dedicated six of the pages to Mr Wong's conduct, noting that the manner in which the lawyer had cross-examined the victim was indecent and scandalous, and seemed intended to insult or annoy her.

Not only are such questions forbidden in court under the Evidence Act, they are also proscribed under the Legal Profession (Professional Conduct) Rules, noted Judge Ho.

During the trial, Mr Wong had asked the victim to stand up. When the judge asked what he was trying to show, Mr Wong said: "Your Honour, I want to see... how attractive (she is) when (she) stands up..."

This prompted the victim to ask: "Is this necessary?"

"I feel very offended," she added.

Shortly after, Deputy Public Prosecutor Kong Kuek Foo interrupted Mr Wong to ask whether it was his case that only attractive women would get molested in the train.

Mr Wong replied: "Well, it's always that there must be a temptation. There must be something attractive for a person to do such a thing. So if you get an old lady, you think people want to molest her?

"So that is important and I want to show that if she is wearing a very low cut (top) with a very voluptuous breast protruding out, (of a) half cut (top), then of course... the higher the tendency that people might commit such an offence.

"First, the manner that the defence counsel stared inappropriately at the victim's breasts... was a grim reminder writ large of what (Xu) had subjected the victim to on the MRT train.

"It made the victim re-live her odious experience. Distress was evoked, with the victim trying to hold back her tears in court.

"The proceedings were immediately stopped... But the damage had been done. Her heart was wrung. During the afternoon session, the victim was visibly affected."

Judge Ho said Mr Wong had also ignored the victim's distress with the impolitic nature of his remarks.

Thirdly, the improper humiliation of victims of sexual crimes in court could discourage future victims from coming forward.

"Finally, members of the Bar need to observe high standards of professional conduct and a proper sense of responsibility in the conduct of cases; if this is not done, the whole profession will suffer in the public's estimation," Judge Ho said.

"Put simply, the defence counsel's conduct is completely unacceptable and deserves disapprobation. His conduct is plainly not in keeping with - and fell far short of - the best traditions of the Singapore Bar."

District Judge Shawn Ho included an extract of court proceedings, which took place when Mr Wong was looking at the victim's breasts, in his grounds of decision:

Mr Wong: Witness, I'm sorry to trouble you again. Can you stand up a bit? Stand up. Okay, thank you. Sit down.

Judge Ho: What was that for?

Judge Ho: What was that for?

Mr Wong: Your Honour, I want to see... how attractive when (she) stands up, you know...

Victim: Is this necessary? I feel very offended.

Mr Wong: Well, I mean, I think it's important because I'm going to ask you even more insulting questions later on.

Mr Wong: Provided it's insulting and scandalous (and not relevant), then you can object under the law...

DPP Kong: Your Honour, the courtroom is not a place for insulting questions. I don't need to learn the law to know that, my learned friend.

Mr Wong: Provided, Your Honour, the question is really insulting and does not go into the relevance of the case itself, then of course Your Honour can object. I'm going to ask a question that is why I want the (victim) to stand up and to show... how attractive and how, I mean, because she said that she wore a full top T-shirt, blue T-shirt... I want to see what's the size of...

DPP Kong: Your Honour, if I may just interject at this juncture? Is it the defence's case that only attractive women will get molested in the train?

Mr Wong: Well, it's always that there must be a temptation, there must be something attractive for a person to do such a thing. So if you get an old lady, you think people want to molest her?

So that is important and I want to show that if she is wearing a very low cut (top) with a very voluptuous breast protruding out, (of a) half cut (top), then of course... the higher the tendency that people might commit such an offence.

So I'm trying to put my case that, you know, looking at the day (how) she was dressed and... her breast size and all these things... whether there is temptation for anybody or the accused to do such a thing.

(Victim steps out of court.)

LAWYER HAD PREVIOUS BRUSHES WITH THE LAW

Mr Edmund Wong Sin Yee is no stranger to controversy.

He had previous convictions for disobeying a public servant's order, insulting the modesty of a woman, causing hurt and careless driving.

Before he became a lawyer, Mr Wong was a marketing manager of a multinational company.

In August 1992, he punched a nurse at the Singapore National Eye Centre and insulted the modesty of a woman employee at the clinic.

A few months after being called to the Bar in 1998, he hit a motorist on the mouth with his mobile phone.

He was given a three-month jail term in 2001 for road rage and fined $2,000 for using insulting words on the motorist's wife, but appealed.

Prosecutors also appealed against the "woefully lenient" sentence, saying Mr Wong behaved like a "total gangster" and his behaviour was "contemptuous".

They also said Mr Wong gave a "sham defence" by alleging a police officer had lied in court. He even tried to disqualify the judge hearing the case by alleging bias.

His sentence was increased to the maximum one year by former Chief Justice Yong Pung How, who also imposed a $1,000 fine.

Then in July 2003, the Court of Three Judges suspended Mr Wong from practice for two years over the road rage conviction.

He later told reporters: "I let the past be the past. Everybody makes mistakes, maybe I made a bit more. The whole episode has made me a better person. I learnt to be more restrained. I've got nobody to blame but myself for all this."

However, in September 2005, Mr Wong was arrested by anti-narcotics officers on suspicion of heading a multi-million-dollar ketamine trafficking syndicate overseas.

He was held under the Criminal Law (Temporary Provisions) Act, a last-resort law used, among other instances, on those whom no one would dare testify against in court.

Mr Wong's urine contained the tranquilliser nimetazepam, also known as Erimin-5. He said he got the controlled drug from a friend as he had trouble sleeping.

He was given a four-month jail term for drug use. The sentence ran concurrently with his detention.

Under the Criminal Law (Temporary Provisions) Act, which must be renewed every five years, persons can be detained indefinitely without trial, when the Home Affairs Minister is satisfied that it is "in the interests of public safety, peace and good order".