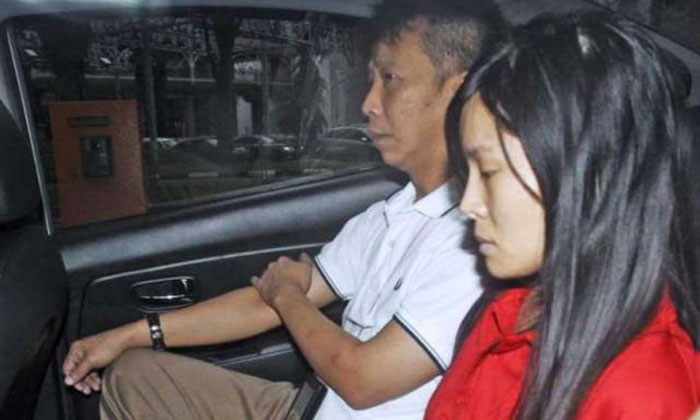 A 32-year-old woman from China allegedly slashed her roommate to death with a cleaver, attacking her repeatedly on her head, face neck and arms.

Jiang Yumei also allegedly stabbed 26-year-old Zhao Jinhua at least three times with a knife during the attack in their rented flat at Kim Court on Lorong 9 Geylang between 11pm on Feb 11 and 10am on Feb 12 in 2013.

The petite Jiang went on trial for culpable homicide in the High Court on Tuesday (Aug 16). If convicted, she faces life imprisonment or up to 20 years' jail and a fine.

She was originally charged with murder but the charge was downgraded to culpable homicide before the trial started.

It is understood that both women worked here as karaoke hostesses.

On Tuesday,the prosecution said that it will lead evidence from 58 witnesses to prove its case against Jiang.

Senior forensic pathologist Paul Chui, who conducted an autopsy on Ms Zhao, testified that there were at least 92 bruises, abrasions and knife wounds on her body. She bled to death from multiple slash wounds.

Dr Chui pointed out three severe injuries that were enough to cause death on their own - a gash across her left cheek that cut a major facial artery, a gash across the back of her head that ran from ear to ear and shaved off a part of her skull, and a gaping wound at the back of her neck that injured her spine.

Jiang's assigned lawyer, Mr Leo Cheng Suan, put her version of events to Dr Chui and asked if it was consistent with the injuries he found.

According to Jiang, she was sleeping when Ms Zhao sat on her and grabbed her throat. Jiang's version is that she retaliated by flipping Ms Zhao over, grabbing a knife that was in her hand and then hacking her with the weapon.

Dr Chui noted that based on Jiang's version, he would expect to see more blood on her bed and the wall next to it. "You need to explain where the blood is," he said.

Deputy Public Prosecutor Mohamed Faizal said in his opening address that after the assault, Jiang spent much of Feb 12 with one Jimmy Ho Voo Chan before telling him that evening what she had done. Mr Ho then took her to a police station to lodge a report.