Jalan Besar murder victim shouted: 'Yes, I owe you money, but why bring out weapon?' 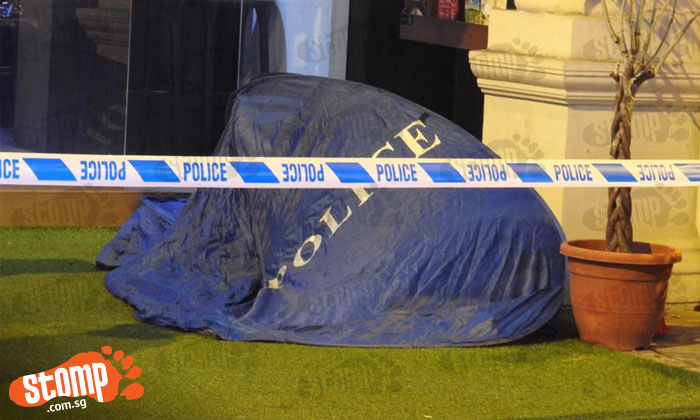 The argument got so intense, they had to be separated by a friend.

Things then turned bloody as one man allegedly stabbed the other in the chest with a knife.

The man died from his injuries.

A 48-year-old man staying at an adjacent hostel, The Trey, who wanted to be known as Mr JS, said he saw the victim and the other man, seen carrying what appeared to be a knife wrapped in newspaper, come out of KSP Pub & KTV at about 11.30pm.

He said the victim shouted in Hokkien: "Yes, I owe you money, but we are brothers, so why the need to bring out weapon?"

The other man had to be restrained by a friend, said Mr JS who works in maintenance.

The victim then crossed the road but challenged the other man to a fight at a nearby alley.

When the man did not follow him, the victim ran back across the road and taunted him again.

That was when the man allegedly stabbed the victim who screamed before collapsing outside the hostel.

"Blood gushed. He was wearing a white T-shirt, making it even more obvious," said Mr JS, adding that the alleged attacker and his friend then fled the scene.

Mr JS said he immediately called the police, who arrived in about two minutes, before calling The New Paper hotline.

"What shocked me the most was that I had just seen the man alive," he told TNP.

A hostel manager, who wanted to be known as Mr Shammy, 35, told TNP that he heard the victim cry in pain outside the hostel.

"I ran out and saw him use his hand to cover the wound on the left side of his chest. He was screaming in pain and blood was coming out from his chest and nose," he said.

The injured man stumbled and knocked over a few tables and chairs outside the hostel.

Mr Shammy added that he tried to help the man by pressing on his wound with his hands and staying with him until the ambulance came.But within seven minutes, the man's pulse faded.

By the time TNP arrived at the scene at about midnight, police had set up a blue tent at the scene.

Officers were seen still investigating the scene at press time.