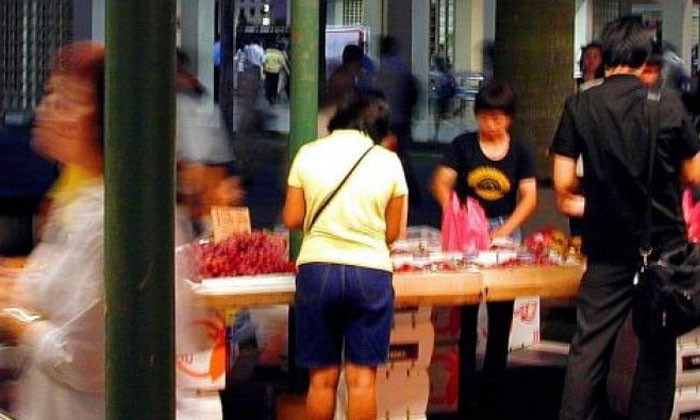 The National Environment Agency (NEA) told The New Paper that the fruit seller who repeatedly set up illegal stalls around Singapore, was caught several times and issued with a notice to attend court each time but he never turned up.

Tan Ah Lai, 61, who was fined $25,000, had pleaded guilty to 50 charges of exposing his food products for sale without a licence last Monday (Nov 28), with 100 other charges taken into consideration for sentencing.

Tan, who did not obtain a licence from the Director General of Public Health, was convicted of putting up fruits for sale at various locations around Singapore between April and November this year.

He would set up shop near the MRT stations at Woodlands, Admiralty, Clementi, Sembawang, Bedok and Yew Te, and seven locations near Serangoon Road, court papers said. NEA said its officers had advised Tan to seek legal ways to sell fruits or get social assistance, but he was unreceptive and kept breaking the law.

The agency also said Tan and his accomplices had attempted to intimidate NEA officers in June this year.

Police had to be called in and the group was given a warning.

Last Monday, Tan, who was not represented by a lawyer, pleaded for leniency in Mandarin before he was fined $500 for each proceeded charge.

They can also approach the Workforce Development Agency's career centres for advice and services to enhance their job search skills and employability.

NEA said it also provides assistance with the application for a stall.

"In order to protect public health and safety, the NEA takes action against illegal hawkers, including foreigners, who circumvent our laws.

"The public's continued patronage of such illegal hawkers not only perpetuates such illegal activity, but also affects the livelihood of those conducting business legally."

Those found hawking illegally may have their goods and items seized and be offered composition of $300, $400 and $500 for the first, second and third offences respectively.

Fourth and subsequent offenders will be prosecuted in court, said the NEA.

In order to protect public health and safety, the NEA takes action against illegal hawkers, including foreigners, who circumvent our laws. The public's continued patronage of such illegal hawkers not only perpetuates such illegal activity, but also affects the livelihood of those conducting business legally.

Related Stories
Jurong West hawker centre's rat problem may not be over yet: Site closed for 3 days
Hawker training programme with mostly young participants so popular it had to be suspended
Now you can buy Michelin-starred soya sauce chicken recipe -- for $2 million
court
crime
NEA
hawker
illegal