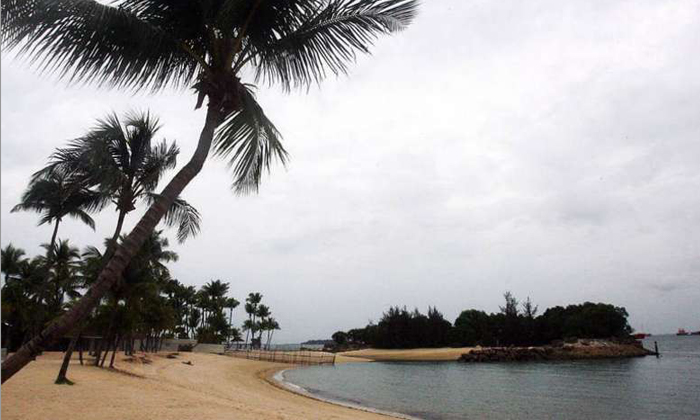 A former Sentosa beach patrol officer was on Monday (Oct 3) sentenced to slightly over 11 years in jail and 12 strokes of the cane for raping and sexually assaulting a drunk partygoer on Siloso Beach.

Pram Nair, 27, had been found guilty in July of committing the sexual offences on a then 20-year-old relief teacher, who was attending a party at Wave House, a club and restaurant located at the beach.

The woman, who was with a female friend on the night of May 5, 2012, had drunk several shots of whisky and orange liqueur before Nair approached her group at the bar and started chatting with them.

Nair suggested playing a game that involved him pouring liqueur from the bottle directly into the victim's mouth for 20 seconds. After gulping down the alcohol, the victim began experiencing memory blackouts.

Some time later, her friend decided it was time to leave and went to get the victim's bag at another section of the club. When she returned, the victim and Nair were gone.

During the 15-day trial from August last year to April this year, the victim said she was "wasted" and could not remember what happened after her friend went to get her bag.

She testified that she woke up on the beach from the pain of Nair raping her. She cried and repeatedly told him "no" but was too weak to push him off.

Two other partygoers walking on the beach called the police when they saw Nair on top of the victim as she tried to push him away.

Meanwhile, the victim's friend found her lying on the sand. Nair, who was there, told her he had found the victim at the spot naked. He walked away but was later arrested nearby.

During his trial, Nair denied that the victim was drunk. He said the victim flirted with him that night and agreed to have sex with him.

On Monday, Justice Woo Bih Li sentenced Nair to a jail term of 11 years and 19 days as well as 12 strokes of the cane for one count of rape and one count of sexual assault by penetration.

The jail term took into account that Nair had been remanded for 11 months and 11 days after his arrest.

Related Stories
18-year-old student molested girl, 16, before raping mutual friend who tried to match-make them
Teen, 18, tried to rape woman while out on probation for randomly attacking women with plastic bags
Man on trial for raping his own mother claims he was slapped around by police before giving 'untrue' statements
Medium rapes woman who sought his help to get rid of 'ghosts' in her flat
More About:
Rape
court
courtroom