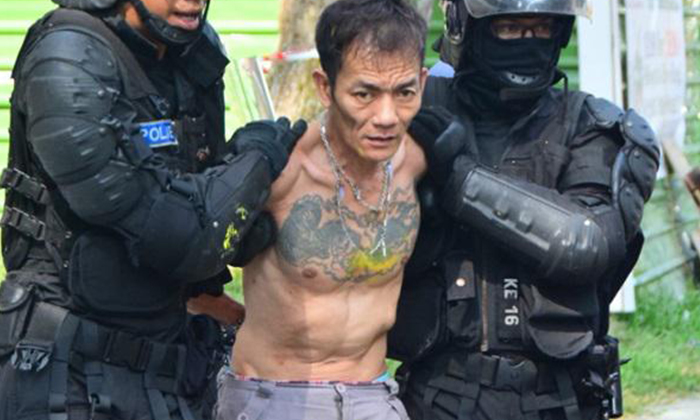 After officers from the Central Narcotics Bureau (CNB) came knocking on his door, a man, fearful that he would be trailed for drug trafficking charges, locked his 71-year-old mother and himself in their Ang Mo Kio flat and threatened to blow the gas canister in a thrilling 16-hour standoff with the police and CNB.

The incident happened last year (2016) on Mar 31 at Block 508 Ang Mo Kio Avenue 8, and the man has been sentenced yesterday (Feb 20) to seven-years-and-four-months jail term, and six strokes of the cane for the consumption of drugs, reports Lianhe Wanbao.

After the suspect refused to open his door, and even threatened officers with a cleaver while holding his mother hostage, the CNB requested for assistance from the police, who arrived on scene promptly.

A standoff with the suspect began.

After searching the premises, officers found eight packs of drugs, including 2.28 grams of ‘Ice’  which investigations have confirmed that the suspected used for himself.

A legal representative for the suspect said that the suspect had been charged with a drug trafficking charge in 2005 and was afraid that he might face the gallows if he was arrested the second time, which was why he acted so recklessly.