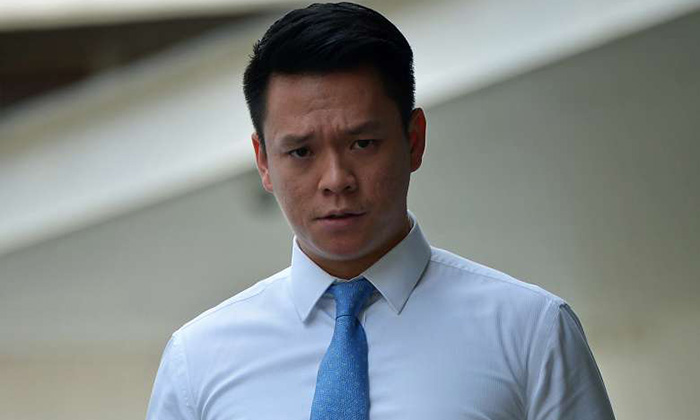 A 28-year-old driver lost control of his car while travelling at more than 100kmh in April last year, causing it to mount a kerb and crash into a railing and a lamp post before hitting a pedestrian, a court heard.

The 58-year-old pedestrian died in hospital later that same day.

Yesterday, the driver, Marcus Chee Nan Ze, was sentenced to six months in jail, having earlier pleaded guilty to one charge of causing death by driving at a dangerous speed.

Chee, a former bank relationship manager who is now unemployed, will also be barred from driving for six years.

The court heard that Chee was driving at about 108kmh along Serangoon Road towards Upper Serangoon Road, near Boon Keng MRT station, at about 6.10am on April 21 last year.

He was in the right-most lane of the four-lane road, which has a speed limit of 60kmh.

The weather was fine, the road surface was dry, visibility was clear and the traffic flow was light.

Chee lost control of the car and caused it to veer to the right, mount the kerb and crash into some railings along the road.

The car then continued forward and ran into Mr Ngai Chee Kiong, a businessman, who was walking on the pavement, close to the railing.

The collision caused him to be flung from the kerb onto the road.

Chee's car came to a stop shortly after the accident, which was captured on closed-circuit television cameras outside Boon Keng MRT station.

Mr Ngai was taken to hospital and found to have severe brain injuries and multiple broken bones.

Chee's car was damaged, but an inspection did not find any inherent defects in the vehicle.

The maximum punishment for causing death by driving a vehicle at a dangerous speed, under the Road Traffic Act, is a mandatory jail term of up to five years.

Chee will start serving his sentence on July 22.