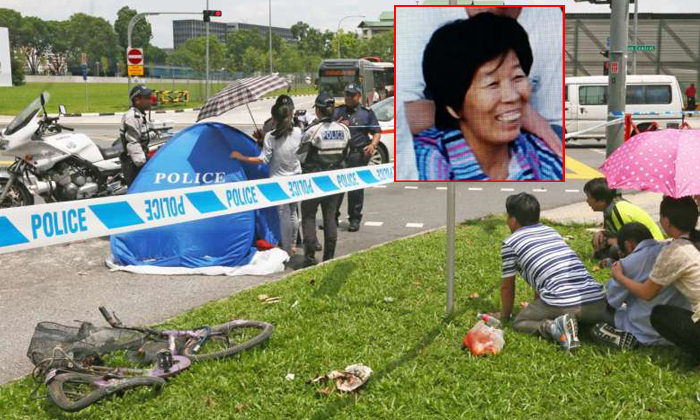 The tyres of a cement mixer truck ran over a woman cyclist at a pedestrian crossing when the driver failed to keep a proper lookout while making left turn, a court heard.

Tan Boon Kwee, 50, neither slowed down nor stopped to check for pedestrians as he was approaching the signalised cross junction of Yishun Central and Yishun Avenue 9 on May 16 this year.

He did not see cyclist Lin Shuiyu, 59, and her two fellow cyclists at the pedestrian crossing, which resulted in the truck hitting her as he was making a left into Yishun Avenue 9 at 11.22am that day.

Madam Lin, a retiree, fell from her bicycle and was run over by the truck's left tyres.

He only stopped about 17m after the pedestrian crossing. He realised what happened when he alighted from the vehicle.

After stopping his vehicle, he used the water pipe from the cement mixer truck to wash the left rear tyre.

Madam Lin was pronounced dead on the spot.

She said a pedestrian and a fellow cyclist were ahead of Madam Lin who was the third person to cross the pedestrian crossing. There was no reason for Tan not to have noticed them especially when he had seen the three cyclists as he was approaching the junction.

APP Lim said Tan was driving a heavy vehicle and should have exercised greater caution when driving.

Tan's lawyer Ramesh Chandra said his client, who has a primary education, had only been involved in a minor accident in his 25-year career as a driver. He said Tan was extremely remorseful for what he had done, and his financial obligations to his family would be affected by a long jail term.

District Judge Samuel Chua said this was a very sad and horrific accident. He said Tan should have been mindful that the cyclists he had seen riding along the pavement earlier would use the pedestrian crossing, and should have exercised extreme caution since he was driving a heavy and high vehicle.

"In the circumstances, I agree with the prosecution that an appropriate sentence is necessary to reflect the extent of the accused's negligence in this case,'' he said before sentencing Tan to 10 weeks' jail and banned him from driving for five years.

Tan could have been jailed for up to two years and/or fined for causing death by doing a negligent act.