At least $14,600 swindled from victims of new Facebook scam in S'pore: Police 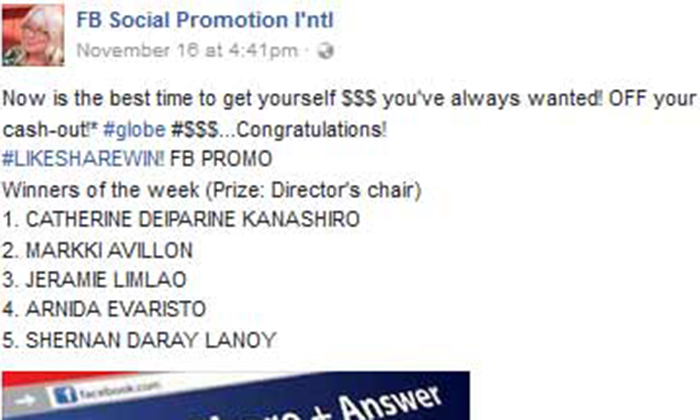 Police are warning of a new social media scam that is making the rounds in Singapore, and has already seen victims swindled of more than $14,000 in three months.

In an advisory issued on Friday (Dec 2), the police said that they have received at least seven reports of a new type of scam carried out on Facebook between September and November this year.

In the scam, the perpetrators first hack or spoof Facebook accounts of the victims' friends. These 'friends' then inform the victims that their names had been included on lists of contest winners on certain Facebook pages.

The victims are then asked to visit these pages, bearing titles like "FB Social Promotion International" or "Home Care Cash Grant", and provide their personal details.

They are then instructed to remit money to overseas parties as insuraance or delivery fees in order to claim their 'winnings'.

The Singapore victims, aged between 44 and 67,  lost at least $14,600. Scams operating online and on social media have been on the rise this year.

In September, police revealed that a total of 1,145 cases of cheating involving e-commerce were reported from January to June this year, a 13.4 per cent increase from last year.

Of these scams, about seven out of 10 were carried out on platforms like Facebook, Carousell and Gumtree.

The police advises members of the public to be careful when acting on messages received through social media platforms.

They recommended taking the following precautions:
- Be wary of messages which say that you have won a prize, especially if you did not enter any lucky draw or contest.
- Ignore requests to make upfront payments to claim a prize. Winning a lucky draw or contest should not require advance payment. - Check that the person you are communicating with online is really the person you know. An imposter can hack or spoof an account and take up a false identity.

Related Stories
Beware of this ZoukOut ticket scam: At least 23 victims cheated of $3,400 in total
Man thought he found good deal for $350 PlayStation 4 -- only to lose $12,350
facebook scam
scam