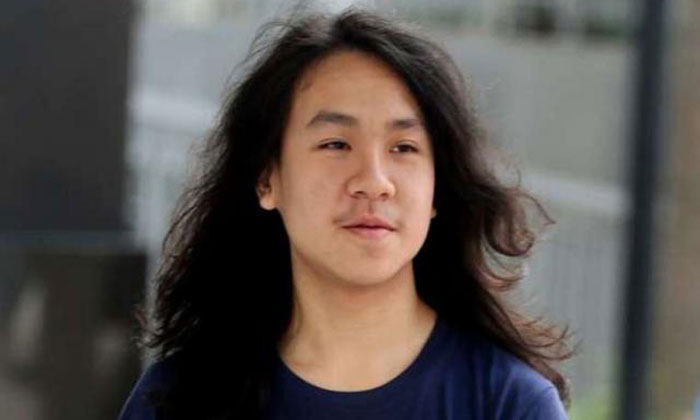 Teenage blogger Amos Yee, who had earlier denied six charges of wounding religious feelings and two of failing to turn up at a police station, has thrown in the towel on the latter two charges.

On the third day of his trial on Tuesday (Aug 23), Yee, 17, pleaded guilty to failing to show up at Jurong Police Division at 9am on Dec 14, 2015, despite being served with a notice by a police officer to do so. He also admitted to failing to turn up at the same police station at 9am on May 10, despite a Magistrate's order to do so.

Principal District Judge Ong Hian Sun will sentence Yee for the two contempt of lawful authority charges at later date, after his trial on the remaining six charges.

The maximum penalty for each charge is one month's jail and a $1,500 fine.

The court heard that the police notice was served to Yee at his Shunfu Road home, with his mother present, on Dec 12, 2015.

Three police officers who handed him the notice also told him that he was required to attend an interview at the police station.

"While (Yee) was away from Singapore, he made various online postings acknowledging that he had been served the notice," said Deputy Public Prosecutor Andre Chong.

"He also stated in these posts that he was on the run from police, and that he had no intention of turning up for the aforesaid interview."

On May 3, a Magistrate issued a warrant requiring that Yee attend an interview at Jurong Police Division at 9am on May 10. The police had requested the warrant.

Three police officers handed Yee the warrant at his home, with his parents present, on May 4.

The officers also asked him to give his signature, to acknowledge receiving it, but he refused.

On May 9, Yee again tried to leave Singapore for Hong Kong.

However, he was stopped at Changi Airport and ordered to surrender his passport.

Still, Yee did not turn up for his police interview the next day.

On May 11, he was arrested and then bailed out by his mother.

Yee was charged in May with eight counts - including six for intending to wound the feelings of Muslims or Christians. He had allegedly posted a photo and five videos, some of which show him insulting the Bible and the Quran.

At the start of his trial last Wednesday (Aug 17), Yee opted to contest all his eight charges.

The teen, who has no lawyer, also said he wanted to cross-examine the prosecution's witnesses.

But shortly after the start of the trial, and before the first witness was called, he told District Judge Lim Tse Haw he wanted "to take a certain course", which is legal parlance indicating that he was considering pleading guilty.

Yee said he recently found out about the Criminal Case Resolution (CCR) process, an avenue for resolving a case without trial.

The judge fixed the case for a CCR, in which the accused can ask for an indication of his possible sentences.

But with no resolution at the closed-door CCR session, the case was sent back for the trial to continue on Thursday (Aug 18).

So far, three police forensic technology officers have testified in the trial. The officers extracted data from webpages such as blogs and social media sites and analysed Yee's laptop and phone.

The prosecution will call seven witnesses, all police officers, in total.

The maximum penalty for deliberately wounding the religious feelings of any person is three years' jail and a fine.

Yee first came to the attention of the authorities when he uploaded an expletive-laden video on March 27, 2015, four days after the death of founding prime minister Lee Kuan Yew. Yee later also posted an obscene image on his blog.

He was convicted on May 12, 2015, and sentenced on July 6 to four weeks' jail. He was released the same day as the punishment was backdated to include his time in remand. He had spent about 50 days in prison after repeatedly breaching bail conditions.