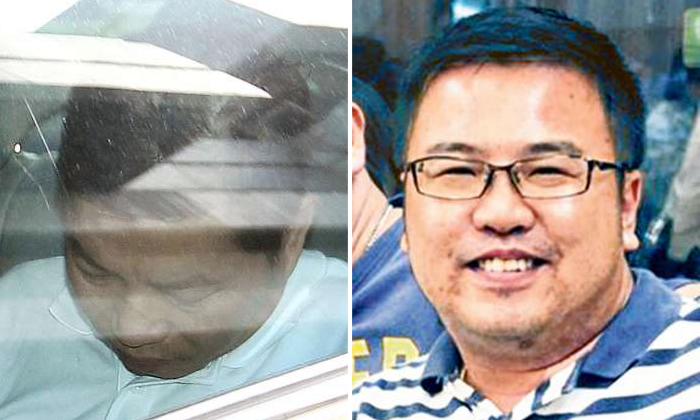 A 50-year-old housewife, whose husband of 25 years is accused of murdering her younger ex-lover, took the stand yesterday on the first day of his trial to tell a tale of deception, suspicion and one errant phone message that led to the alleged love triangle killing.

But showing that she still had feelings for the father of her two children, Madam Serene Goh Yen Hoon, when asked by the prosecution to identify the man in the dock, put a hand on her heart, looked at Chia Kee Chen sorrowfully and told the court softly: "My husband."

Chia, 56, faces the death penalty or life imprisonment if convicted of murdering 37-year-old Dexmon Chua Yizhi, between Dec 28 and Dec 29 in 2013.

His wife, a petite and youthful-looking mother of two, who wore a grey hoodie in court, gave an account of her one-year affair with Mr Chua and how her husband reacted in anger when he found out.

Madam Goh was working as a sales executive at a packaging company in 2003 when she met Mr Chua. He was in a different department, but they took the same company transport as they lived in the same area, she said.

In July 2011, Mr Chua, who was married to a Thai woman, offered Madam Goh a ride home in his car. She accepted and from then on, he took her home regularly. They grew closer, she said.

Around the same time, Madam Goh added, she started receiving calls from a woman who claimed to be her husband's wife in Indonesia. But Chia, who owned a fish farm in Tanjung Pinang, denied this.

In August 2011, Madam Goh and Mr Chua started meeting after work for sex - in his car, at his home, and once at a hotel. They also poured out their marital woes to each other. "While I was having an affair with Dexmon, I felt guilty towards my husband," she said.

Mr Chua also recorded a video of their sexual tryst for "sentimental purposes" in June 2012, although he promised to delete it. Soon after, they stopped having sex but continued talking on the phone, she said.

In November that year, when her husband questioned her about text messages from "Dexmon", she admitted to the affair. She told him she was worried that her lover might disseminate the video, and also promised to break off the relationship.

She said her husband phoned Mr Chua and told him to stop seeing her. He also took her to consult mediums, believing that the younger man had "cast a spell" on her.

On the eve of Chinese New Year, she said, Mr Chua mistakenly sent a video greeting on WhatsApp to her. This rekindled her husband's anger, even though she had cut off contact with Mr Chua. That was the last time they spoke about him.

In the early hours of Dec 29, 2013, she was awoken by a call from her husband, who asked for the phone number of her brother Goh Beng Guat. Prosecutors say Chia went on to ask Mr Goh for help to carry Mr Chua's body, but he said no.

That afternoon, Chia, Madam Goh and their two daughters left for a family trip to Johor Baru. When they returned to Singapore on Dec 31, she said they were stopped at Woodlands Checkpoint and told to assist in police investigations.

After his wife's testimony as a prosecution witness, it was the defence's turn to cross-examine her. But Chia, who sat hunched over with his head down, told his lawyer Peter Fernando not to.

Related Stories
Son who killed father at West Coast flat says he 'did not know a chokehold would kill him'
Woman who stabbed hubby to death after he attacked her and threatened to kill daughter gets a year's jail
Half-naked body of woman found in suitcase in Perth river: S'porean ex-hubby and daughter charged with murder
Former Singapore Poly student who knifed brother to death jailed 7 years
Karaoke hostess from China on trial for killing roommate in Geylang flat
murder
affair
cheat
cheating
couple
court
courtroom
husband murders wife's lover