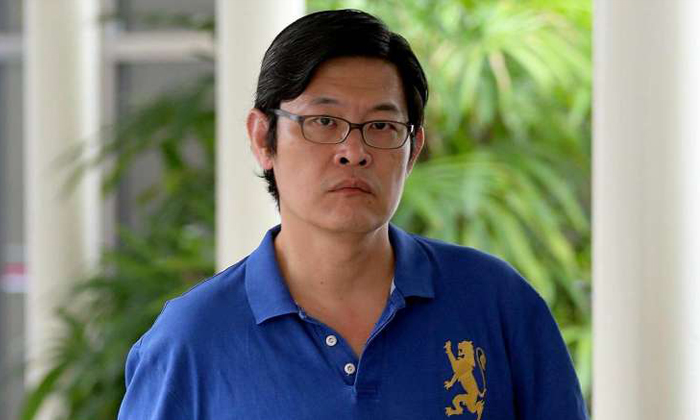 A secondary school teacher who preyed on a girl four times his junior and got her to send him more than 50 nude photos and videos over a nine-month period was jailed for 22 months on Friday (Oct 7).

A district court heard that Kuang Liang Yong, 47, had embarked on a sustained campaign of deception and emotional manipulation. He crafted a fake identity of a man who suffered from erectile dysfunction to gain the 13-year-old's sympathy and got her to send the nude photographs and videos to him in 2012 and 2013.

His WhatsApp messages to her ran into more than 400 pages over two years.

The offences took place on 13 occasions over a nine-month period, involving a total of 57 pictures and videos.

Kuang had also stalked a 12-year-old girl by pretending to be a Primary 6 boy in August and September 2015. He persistently sent her lengthy reams of text messages throughout the day, expressing his love for her and pestering her to respond.

Apart from the jail sentence, Kuang was also fined $500 for behaving in a disorderly manner, one of the five charges proceeded. Ten others were taken into consideration in sentencing.

Deputy Public Prosecutor Amanda Chong Wei-Zhen had told the court that in early 2012, Kuang was with his family at a games arcade at Sun Plaza in Sembawang when he overheard the first victim, then 12, telling a counter staff that she had lost her mobile phone.

He let her use his phone to try and locate her mobile, and saved her number without her knowledge as he found her "adorable'' and took a liking to her, said DPP Chong.

He subsequently contacted her over WhatsApp messenger, and identified himself as "Sean Romeo''. He did so over WhatsApp for almost two years - commencing before February 2012 and ceasing only in December 2013.

Sometime in August 2012, he misrepresented to the victim, then 13, that "Sean Romeo'' had been in a motor accident and was unable to have sex.

He feigned depression and said he wanted to give up on life because of his erectile dysfunction.

As a result, the victim complied with his request and sent him three nude photographs of herself as she was very sympathetic and wanted to help him.

Kuang responded, saying he loved her for she "really sacrifice for me''.

Less than a month later -on Oct 8 - he told her to remove her clothes for him. He pestered her to send him more nude pictures and videos of her doing a sexual act. She sent him six photos and three videos of the indecent act.

The victim was 14 when she sent him one nude photo and a video on June 21, 2013. This was a day after he had messaged her, claiming that he was going to kill himself when she threatened to stop contacting him as she was frustrated that he had not told her more about himself.

The offences came to light when the second victim's father lodged a police report on Sept 6, 2015 that his 12-year-old daughter had been having a WhatsApp conversation with an unknown person saved in her contacts as "Guardian Angel''.

Kuang had engaged in a course of conduct which involved acts associated with stalking, by persistently sending the Primary 6 pupil messages in which he made unwanted advances to her and keeping her under surveillance. He had posed as a 12-year-old Primary 6 boy from a poor background to gain sympathy for himself.

In his oral grounds of decision, District Judge Terence Tay ticked off Kuang for masquerading as "Sean Romeo'' on a reprehensive agenda by sexually exploiting a naive young girl.

He said he generally agreed with the aggravating factors cited by the prosecution such as Kuang's predatory conduct, pre-meditation and the degree of exploitation.

He said he was particularly disturbed by the fact that Kuang had tried to broaden his sphere of influence by asking the victim to ask for the phone numbers of three other girls.

Kuang, who is married with two children, has resigned from the education service. He was represented by Mr Paul.

Related Stories
Parents trusted man who took their 3 primary school boys on outings -- but he had been forcing them to do oral sex
Man takes upskirt videos of 33 women -- then ranks them by beauty
Man took upskirt photo of army mate's GF and threatened to upload if she did not send a nude pic
More About:
teacher
court
courtroom
sex
student
sex with student
indecent
inappropriate activity