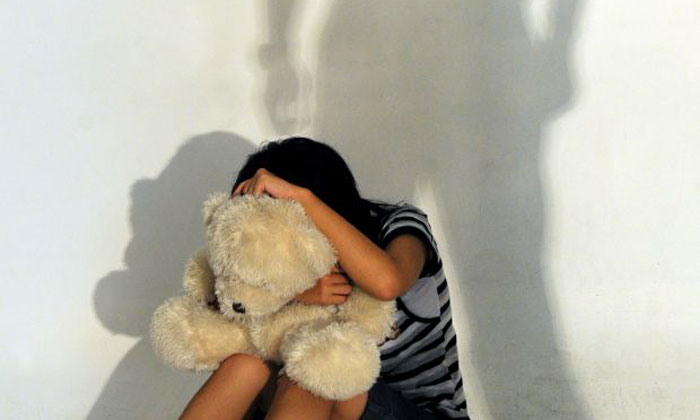 The 11-year-old girl was asleep when her stepfather sat beside her mattress.

After switching on the television, he stroked her head, then slid his hand under her shirt and molested her.

The incident in April was not the first time he had molested her.

He had performed a similar lewd act on her last year as well.

The crimes came to light after the girl confided in her school counsellor, who alerted the Ministry of Social and Family Development (MSF).

Yesterday, the stepfather, 43, a cleaning supervisor, was jailed 15 months and ordered to be given three strokes of the cane.

We are not naming anyone due to a gag order.

Court papers said the girl's mother - who has four children, including the victim, from her previous marriage - had married the man in 2012.

The girl and her siblings would address their stepfather as "daddy", and they lived in an HDB flat near Jalan Besar.

The man also had two children with his wife.

He first molested his stepdaughter sometime last year by placing his hand over her shirt and touching her breast.

He preyed on her again on April 6 this year when the girl was sleeping on a mattress in the living room.

Between midnight and 6am, she woke up when she heard the television in the living room being switched on.

She opened her eyes briefly and saw her stepfather sitting on the floor, near her head.

He then used his right hand to caress her head before molesting her.

The girl pretended to sleep because she was terrified.

She broke down in school that day and was taken to the school counsellor where the truth emerged.

An MSF officer took the girl to the police station on the same day to lodge a report.

Yesterday, the stepfather, who was not represented by a lawyer, pleaded guilty to one count of outraging his stepdaughter's modesty, with another taken into consideration for sentencing.

District Judge Hamidah Ibrahim said in sentencing that he was supposed to be taking care of his stepdaughter, not taking advantage of her.

For committing molestation, he could have been jailed up to five years with caning and fine.

Related Stories
Security guard had sex with 15-year-old boy -- while his blind grandpa was in next room
Father inflicts "gravest form of sexual abuse" on 10-year-old daughter by sodomising her while she was in school uniform
Construction worker jailed two years for sex with girl, 13, who became pregnant
More About:
sex
inappropriate
child abuse
crime
arrest
court
courtroom
jailed