Do you know Daryl Tay Kai Long? Police are looking for him in relation to 'Molotov cocktail' attack at St James Power Station 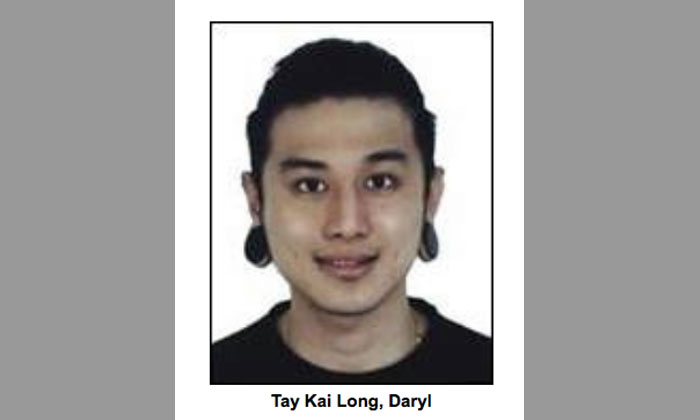 The police arrested four men aged between 23 and 26 in separate operations on September 13 and 14 in connection to a case of mischief by fire involving the use of 'Molotov cocktails' at St James Power Station.

The police posted an appeal for information on Mr Tay Kai Long on their Facebook page.

The police received a call requesting for assistance at an entertainment outlet at St James Power Station on September 13 at about 2.25am.

Officers who responded to the scene discovered fragments of broken beer bottles and soot near the entrance of the outlet.

On-scene investigations revealed that four bottles filled with petrol were believed to have been lit and thrown by three unknown men who were then spotted to have fled from the scene immediately following the incident.

Fortunately, nobody was injured.

Their work paid off when the identity of the first suspect was established and he was arrested within 20 hours of the report lodged.
The identities of the other accomplices were subsequently established and they were arrested in separate operations mounted on 13 and 14 September 2016.

Preliminary investigations revealed that the incident was believed to have been an act of revenge arising from a previous dispute between one of the suspects and the staff of one of the entertainment outlets at St James Power Station.

Deputy Commissioner of Police (Investigations & Intelligence) concurrent Director of the Criminal Investigation Department, Tan Chye Hee, commended all the officers involved for their perseverance and hard work which resulted in the swift arrest of the suspects.

“The use of ‘Molotov cocktails’ in Singapore is rare but is a very severe offence which the Police have zero tolerance for. Such brazen acts and blatant disregard for the law can cause widespread damage to property and loss of lives. The Police will not condone such acts and will see to it that those who perpetuate violence will be dealt with severely in accordance with the law.”