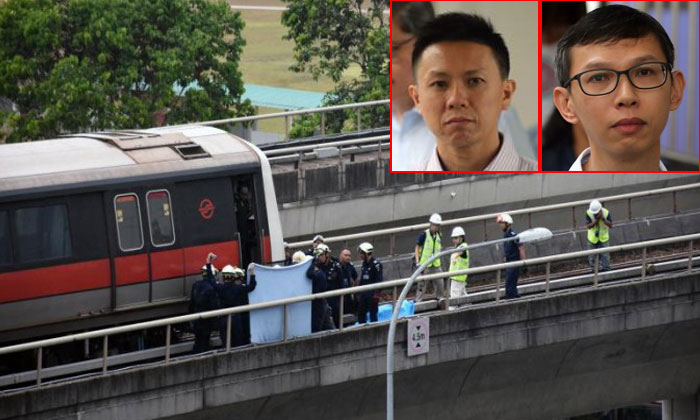 SMRT Trains and two of its employees were charged in court on Thursday (Dec 1) over an accident along the MRT tracks earlier this year (2016), in which two workers died after they were hit by a train.

SMRT, which is expected to plead guilty, is accused of contravening the Workplace Safety and Health Act, by failing to ensure that its employees complied with approved operating procedures when accessing the track between Tampines and Pasir Ris MRT stations.

It also did not ensure that the procedures practised by its employees to access the track passed safety audits, were documented and disseminated, it is alleged.

In the same court, the company's director of control operations, Teo Wee Kiat, 40, is accused of a similar offence under the Act.

The company's officer-in-charge of the work party which was inspecting the tracks on March 22, Lim Say Heng, 47, is alleged to have caused the deaths of Mr Nasrulhudin Najumudin and Mr Muhammad Asyraf Ahmad Buhari by a negligent act.

He allegedly failed to ensure that necessary safety measures were in place so trains did not enter the track before accessing it, leading to a train hitting the men.

The two men were part of a work party of 15 SMRT employees led by Lim to carry out inspection works on the MRT tracks.

The six signalling workers and nine track workers were on a maintenance walkway near Pasir Ris station to check a possible fault in a component. As they approached the device, the signalling team, led by a supervisor, stepped onto the track.

The supervisor narrowly avoided being hit by the oncoming train but Nasrulhudin, 25, and Muhammad Asyraf, 24, who were second and third in line, were unable to react in time.

The two young men were two months into the job.

In a statement on Thursday (Dec 1), the Attorney-General's Chambers said that investigations are still ongoing to determine if any other people may be liable for workplace safety lapses in connection with the tragedy.

Responding to the charge against Lim, the National Transport Workers' Union Executive Secretary Melvin Yong said the union would support him and his family and ensure that he was fairly represented.

Mr Yong said: "Whilst we cannot comment on any ongoing legal proceedings, the union maintains that it is important to allow due process to take its course and all facts to be revealed before drawing any conclusions." A pre-trial conference is set for Dec 30.