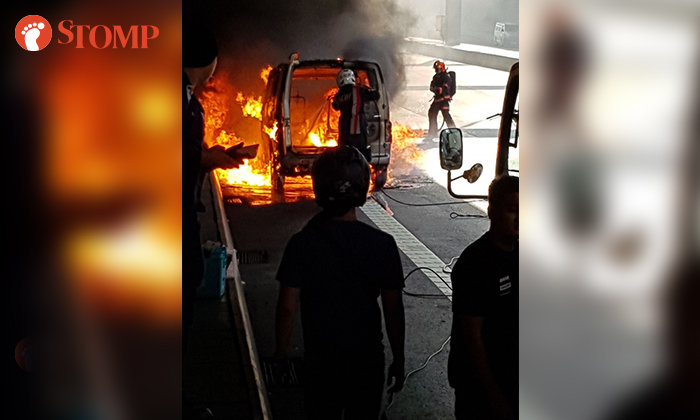 A couple was on their way to visit their father in Singapore General Hospital (SGH) when their van started to emit smoke at around 5.10pm today. (Feb 9)

Stomper Sam told us that the couple then parked their van at the side of the expressway near Outram Road exit.

"They quickly jumped out of the van," said Sam.

Less than 10 minutes later, the van burst into flames.

Sam sent in photos and a video of the van that was engulfed in flames as Singapore Civil Defence Force (SCDF) officers tried to put it out.

He told Stomp that before SCDF officers arrived, he and a few other motorists had ried to put out the flame with a nearby hose but was unsuccessfulas the hose was too short.

SCDF officers arrived shortly after and put out the blaze.

"They were on their way to visit their father in hospital, I think he's also going to pass away," said Sam.

A video that Stomper Apid shows that traffic slowed to a crawl as a result of the incident.

Stomp has reached out to the SCDF for more information.