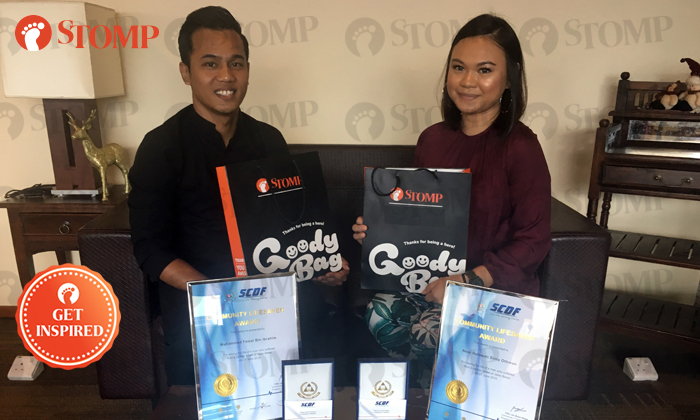 It was just like another regular date in their year-long relationship and they had been about to call it a night, when it turned into one that the couple would never forget.

Mr Muhammad Faizal Ibrahim, 26, and Ms Noor Hafawati Othman, 28, were about to head home when they saw a man collapse in front of their eyes on June 27.

Without hesitation, they stepped forward and performed cardiopulmonary resuscitation (CPR) on the unconscious man, successfully reviving him before the Singapore Civil Defence Force (SCDF) arrived.

The incident occurred in Jalan Besar, opposite Sim Lim Tower, at around 1.15am.

Photos and videos of the couple's heroic deed went viral after being posted on Facebook, with netizens praising them for their actions.

On Tuesday afternoon (July 3), the couple received the Community Lifesaver Award from SCDF and Stomp Goody Bags in recognition of the part they played in saving the man's life.

SCDF Division Commander Colonel Lim Boon Hwee said: "A life was saved, thanks to the civic-mindedness and quick response from this loving couple."

Speaking to Mr Faizal and Ms Hafawati, he added: "We are very proud of what you have done. It's true to the spirit of the Community First Responders. Both of you thoroughly deserve the Community Lifesaver Award."

According to Colonel Lim, the victim is currently recovering in hospital.

In a media interview, Mr Faizal revealed how he was actually "nervous" and "scared" when performing CPR on the man.

Although he is trained in first-aid due to the nature of his job, he never had to apply his skills in a real-life situation -- until now.

Ms Hafawati, a nurse at Thomson Medical Centre, quipped: "He was actually very, very nervous. He kept on asking me, 'Am I doing it right?'

"His hands were shaking. I told him to calm down and relax."

Mr Faizal said: "I don't know what would have happened without her."

Ms Hafawati, who guided her boyfriend through the process while checking the victim's breathing, also shared how she had come close to leaving the scene in a Grab ride when the incident occurred.

However, she decided to cancel her booking upon realising had happened to the man and went over to join Mr Faizal in his resuscitation efforts.

"I was on the phone with the driver, and he kept asking if I wanted to get in or not.

"In the end, I decided to cancel the ride and stay behind," recounted Ms Hafawati.

Saying that they simply happened "to be in the right place at the right time," Ms Hafawati added: "It takes courage for someone to step up.

"Don’t be scared, just help however you can help."

Asked if the shared experience of saving a life has changed their relationship in any way, Ms Hafawati told Stomp: "He can't wait to tell his future children."

Stomp presented Mr Faizal and Ms Hafawati with a 'Goody Bag' each for being an inspiration, as part of our efforts to recognise everyday heroes and highlight heartwarming deeds.