Couple who hit maid, forced her to pour hot water on herself and starved her gets convicted 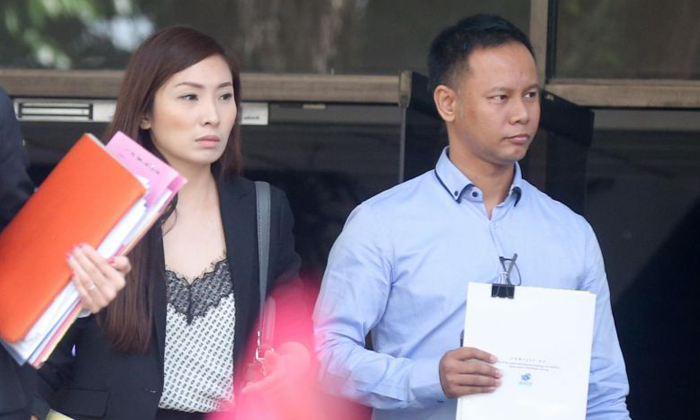 Tormented for months, a maid was forced to perform multiple acts of self-harm, including pouring scalding hot water on herself and drinking dirty water mixed with detergent.

Ms Phyu Phyu Mar also did not receive her monthly salary of $700 throughout her employment with her abusers, and her weight plummeted from 50kg to 38kg because of a lack of food.

Seah, who manages Anew Me Beauty Aesthetic salon at The Centrepoint shopping mall in Orchard Road, was convicted of five assault charges and one count of causing the maid to drink the tainted water.

The judge found her interior designer husband guilty of one count of assault.

The Singaporean couple, who have a five-year-old daughter, committed the offences in their Punggol Walk flat between August and October 2016.

The DPPs added that the maid received her full salary only in November that year when the Ministry of Manpower intervened.

Delivering her verdict on Friday, the district judge said: "Linda and Lim sought to portray themselves as considerate and concerned employers. But this could not be further from the truth."

Ms Phyu Phyu Mar testified during the trial that Seah made her pour hot water on herself on two occasions - in August and September 2016.

On Friday, Judge Low said that according to the prosecution, Seah was unhappy with the maid and boiled some water in a kettle before asking the Myanmar national to pour some on her own left shoulder. The maid complied.

The second incident took place after Seah became angry as she felt that the maid was slow in completing her chores.

The maid suffered scald marks and blisters on her skin when she complied.

Instead of taking her to a doctor, Seah gave her a needle and told her to puncture the blisters herself.

Besides these incidents, Seah also ordered the maid to drink tainted water, made her hit her head against the floor, grabbed the Myanmar national's hair and used a mobile phone to repeatedly hit her.

On Oct 13, 2016, Lim punched Ms Phyu Phyu Mar's forehead twice after he wrongly assumed that she had thrown away his spectacles.

The court heard that the Myanmar national used to accompany Seah to her salon a few times a week and one of its workers alerted the police the next day.

Police went to the couple's flat on Oct 15, 2016, and Ms Phyu Phyu Mar was taken to Khoo Teck Puat Hospital where she was warded for six days.

The couple are expected to be sentenced on Feb 11.