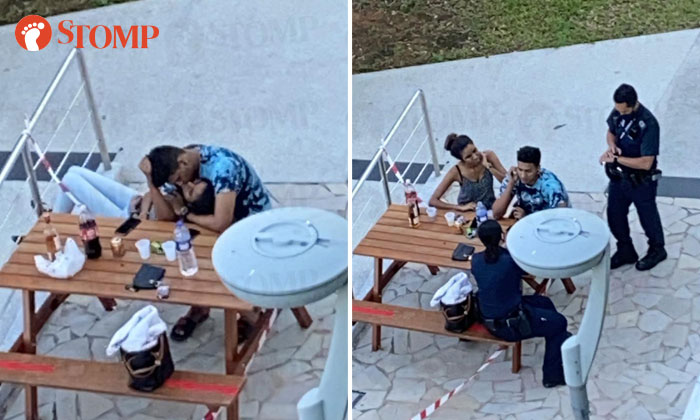 A man and woman who were seen kissing and having drinks at a public bench at Upper Boon Keng Road on Tuesday (Apr 14) were each fined $300 for breaching safe distancing measures.

A Stomper alerted Stomp to the incident and shared photos and a video of the couple sitting at the bench near a barbeque pit that had been cordoned off with red and white tape.

"The police arrived at 9.10am after several calls from different neighbours," she said.

In response to a Stomp query, the police said: "On Apr 14 at 8.38am, the police received multiple calls from a member of the public who informed that two persons were sitting on a bench that had been cordoned off at Block 8A Upper Boon Keng Road, as part of elevated safe distancing measures.

"When the police officers arrived, they found a 20-year-old man and a 19-year-old woman sitting on the bench within the cordoned area.

"They were each issued a composition fine of $300 for breaching safe distancing measures under the Covid-19 (Temporary Measures) Act 2020.

"They were advised to adhere to the measures, and left the area thereafter."

Related Stories
Family appeals for help after 'godson' allegedly insists on visiting their elderly dad despite police warning
Auntie accuses enforcement officer of bullying and forcing her to wear mask: 'It's my problem if I die'
Man and wife get warning letter for visiting his mum in Jurong West -- after he calls police for family dispute
More About:
illegal
fine
fined
couple
kissing
Covid-19