Couple kissing on bus remain oblivious to kids and commuters: "They were making fools of themselves" 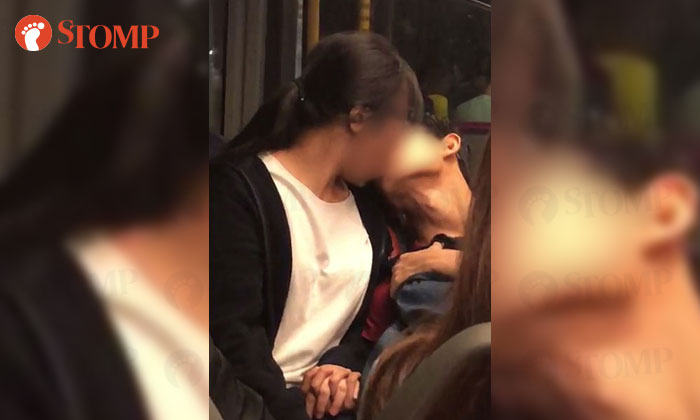 Stomper M was appalled when she became an unwilling spectator to a couple's very public display of affection on board a bus.

M had boarded bus service 101 from Changi Airport's Terminal 1 on her way home from work on Friday (Oct 26), where she found herself sitting facing the couple.

"My friend and I were seated at the very last row of the bus," she said.

M added that the bus was full at the time.

"At first they were just flirting and teasing each other," M said.

"However, when the bus was on the Tampines Expressway (TPE), they started making out."

"It was so embarrassing!" said M.

"They were acting indecently and were making fools of themselves.

"To make it worse, there were kids sitting next to them watching what they were doing."

M told Stomp that several other commuters standing near the couple turned to face the other way while some covered their eyes with their hands.

"There were other people taking videos of them as well," she said.

"I wanted to go over to them and tell them to stop but my friend told me not to make a scene.

"It was so disgusting, there was a lot of tongue action and saliva as well."

In a video M shared with Stomp, the guy is seen wiping his mouth on the girl's sweater after they are done making out.

"They finally stopped when they realised people were looking and taking videos of them," she said.

"They shouldn't be doing this in front of people.

"Since they are already on the way home, they should just wait until they get home!"