Couple keep Yishun neighbourhood awake with their loud quarrelling: "You think I'm scared of you?" 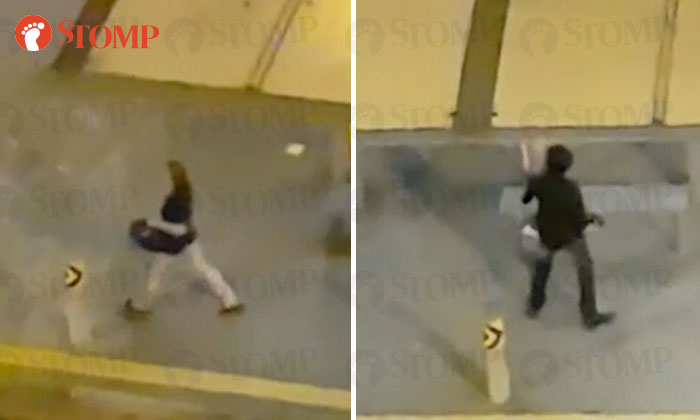 A heated argument between a couple after Thursday midnight echoed through the Yishun neighbourhood.

The incident happened at a bus stop in front of Block 798 Yishun Ring Road, on Friday morning at around 12.30am.

Stomper Bugatti who was at home heard people shouting and looked out from his unit window to see a couple amidst a dramatic altercation.

He took a video of the incident and sent it to Stomp.

In the video, a woman is first seen screaming at her male companion.

The man reacts by hurling the woman’s bag on the ground and proceeds to walk away.

“You think I’m afraid of you?”

Suddenly, the man makes a U-turn and walks back to the woman, shouting at her.

The woman then retrieves something from her bag and slams it on the metal benches at the bus stop.

A loud 'clank' sound is heard.

The man takes the item that the woman had thrown on the bench and walks away.

However, he returns again and then boards a bus, leaving the woman alone at the bus stop.

It is unclear what triggered the argument.

“They were so noisy, shouting in the middle of the night.

“The whole neighbourhood was awakened by their dispute.”