Couple attacks two men with bamboo pole until it breaks, rains blows on them at Spooner Road flat 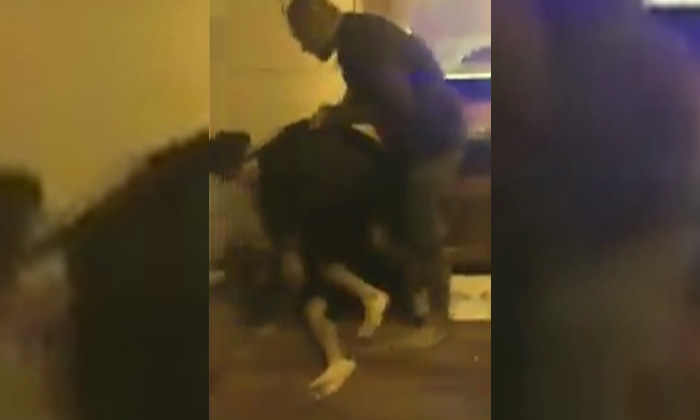 A couple attacked two men using an array of methods, ranging from bamboo poles to their bare hands, in a one-room first-storey flat of a block at Spooner Road last Saturday night (Jul 7).

The eight-minute viral video of the attack, that was uploaded onto Kaki Layan Pesbuk's Facebook page on Tuesday (Jul 10), has nearly 1,800 shares and 373 comments as of 3.19pm today (Jul 13).

At around the 20-second mark of the video, the woman is seen hitting one of the victims until her bamboo pole was broken in half.

She then gave chase after one of the victims ran away, while the man dragged the other victim by his collar before punching him to the ground.

The victim appears to plead with the man as the latter continued to attack him, even going as far as to ram his head against a sofa's wooden armrest.

The woman reappears moments later, still armed with her bamboo pole, and joined the man in his attacks towards the victim.

The woman continues scolding and hitting the victim while he screamed for her to stop.

He then finally manages to escape, running towards a door.

According to The New Paper, family members, who did not want to be identified, said the woman in the video was an unemployed 35-year-old.

The woman's teenage daughter, who cannot be identified, told TNP that her mother could no longer be contacted and was missing by the time she woke up yesterday morning.

The daughter also said that a "gang of about 20 people" had allegedly arrived at the flat and smashed a window using a stool.

"The glass shards landed right next to a baby," she said.

"Only my grandmother, the baby and some other children were at home then."

A police spokesman said they were alerted to the window-smashing incident on Sunday night and have classified it as a case of mischief.

Read the full story on The New Paper.

Related Stories
Man asked ex-GF for $2k, punched her after she told him to work for it at her chicken rice stall
Man slams doors, pulls bus captain by collar after failing to board at Holland Avenue bus stop
2 men arrested for fighting at Aljunied MRT Station -- over toilet urinal
More About:
fight
violent
dispute