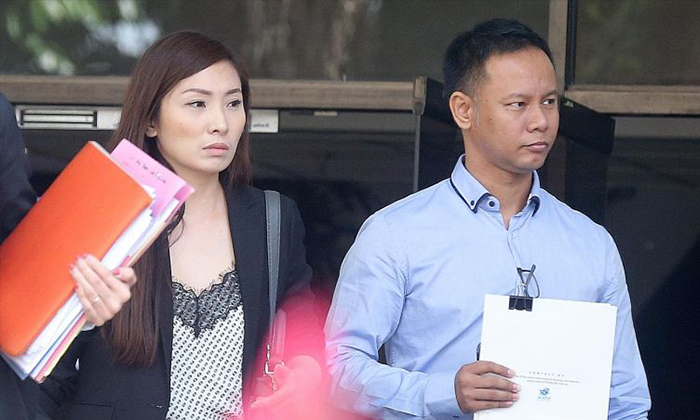 A couple who subjected their helper to a range of abuse, including physical assault and forcing her to pour scalding hot water onto herself, has claimed trial to the charges.

The married couple staying in their Punggol Walk flat committed the offences between August and October 2016, reports The Straits Times.

Linda Seah Lei Sie, 38, who employed Myanmar national Phyu Phyu Mar, is said to have caused her to drink water mixed with floor cleaner and even got her to knock her own head on the floor.

She is also accused of pulling the helper's hair and shaking her until "quite a lot" of hair fell out and hitting her with a mobile phone, causing bruising on her left eye, forehead and left hand.

Seah who is a "boss" at her husband's Anew Me Beauty Aesthetic salon, is accused of physically abusing the woman multiple times.

She faces six charges in total.

Her husband, 43-year-old Lim Toon Heng who is a director and shareholder of the salon, faces one assault charge for punching the maid on the forehead twice.

Ms Lee Lee Yen, who used to work at the salon, told the court that she performed administrative duties there between December 2015 and October 2016.

Ms Lee, who is now an insurance agent, said Seah first took Ms Phyu Phyu Mar, who is in her 20s, to their workplace in February 2016.

The maid performed jobs such as cleaning windows and dusting shelves.

"She was quite chatty. She had long hair and looked a bit chubby," Ms Lee said.

She testified that the maid had slimmed down by September 2016, and that she complained of being hungry.

Ms Lee said she gave her some biscuits and drinks, which were consumed "at a very fast speed".

On Oct 14 in 2016, Ms Lee noticed that the maid had a swollen left eye and a bruise around it. When asked about this, the maid showed her an injury on her left shoulder.

Ms Lee told District Judge Olivia Low: "It was a hot water scalding mark. It was red and the skin was starting to peel off... She told me Linda poured hot water on her and made her pour hot water on herself."

Ms Lee then informed the police later that evening.

Seah is represented by lawyer Kasturibai Manickam, while her husband Lim's lawyer is Mr T.U. Naidu.

When cross-examined by Mr Naidu, Ms Lee said that Ms Phyu Phyu Mar did not mention his client in her allegations.

Ms Kasturibai also asked Ms Lee if the maid had told her how she got the bruise. Ms Lee replied: "She did not tell me."

She also testified that she is unsure if Seah had indeed abused Ms Phyu Phyu Mar.

"That is why I lodged a police report... I believe the police will carry out a thorough investigation," said Ms Lee.

The trial resumes today. Those convicted of maid abuse can be jailed for up to three years and fined up to $7,500.

Related Stories
Mentally disabled woman dies after being abused for 8 months by couple
Toddler slapped and threatened while learning math -- despite asking to be 'taught lovingly'
Man in Malaysian pushes and throws money at GF after she allegedly spilt water
More About:
abuse
maid
assault
couple
punggol