Convertible car driver accused of being a menace again at Tampines 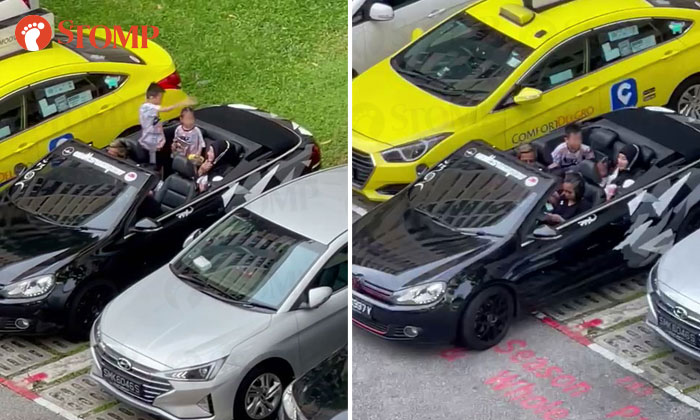 Another resident is complaining about a convertible driver who appears to be notorious in his Tampines neighbourhood.

Stomper Jink shared with Stomp a video of the convertible with children standing in the back and not wearing seatbelts taken on Apr 24 at about 6pm.

He decided to share this after reading an earlier Stomp report about the same convertible car driver revving his engine over a 'stolen' lot near Block 877 Tampines Street 84 at about 11pm on Apr 13, waking up other residents.

Stomper Jink said: "As he was about to travel in his convertible with the top down, his child flung litter from the car and there were no child seats for the children.

"He also let his children stand in the back seat with the top down, a clear reckless and dangerous act of negligence.

"This d*bag is a rude neighbour and loves revving his sports car, he bullies other car owners about parking lots and often causes noise pollution.

"Ever since he moved into the neighbourhood, he has been a menace, revving his car day and night to announce his arrival or departure to the whole neighbourhood."