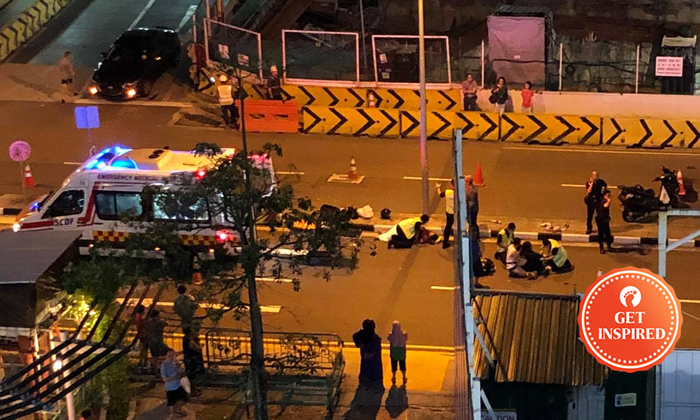 A man and a woman were sent to hospital after an accident involving their motorcycle and a car along Ang Mo Kio Avenue 4 on Saturday night (March 24).

In response to a Stomp query, the police said they were alerted to the accident at 9.56pm.

A 30-year-old male motorcyclist and his 25-year-old female pillion rider were conscious when taken to Khoo Teck Puat Hospital (KTPH).

The Singapore Civil Defence Force (SCDF) told Stomp it responded to the accident near Block 641 at around 10pm and conveyed two people to KTPH via ambulance.

Sharing photos of the accident scene, Facebook user Justina Tyn described how she "heard a honk and then followed by a loud crash" from her home on the seventh floor.

When contacted by Stomp, Justina said: "I saw a female jogger running to the accident site and a few passers-by called the ambulance.

"Both casualties were conscious because I saw them moving their hands and one of them used the phone."

What Justina witnessed next warmed her heart deeply.

She recounted: "Something caught my attention.

"Almost instantly, they managed to smooth the traffic to prevent a jam and also ensured the safety of others."

Justina commended the construction workers for being "awesome beings" who "helped out selflessly without wanting any credit" despite the stigma surrounding them.

"They don’t have to do it but they did it anyway. They can either sacrifice their rest or ignore and take a break after a long hard day at work but they chose the latter.

"Be kind, be brave and help one another," she added.