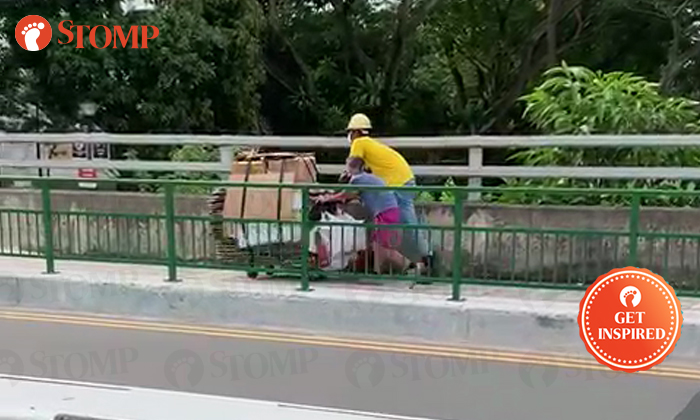 The touching sight of a construction worker selflessly going to the aid of an elderly woman warmed Stomper Michael's heart.

Stomper Michael witnessed the incident in Potong Pasir, near a construction site before St Andrew's Junior College, on Monday (Oct 4) at around 5pm.

A video taken by Michael shows the worker helping the elderly woman to push a trolley that was loaded with cardboard.

In the video, Michael can be heard saying that it's "one of the nicest sights" he has ever seen.

Michael told Stomp: "This worker went to help the cardboard auntie despite his own troubles. I felt a sense of awe watching this as it told me that there is still hope in humanity.

"I also feel that those who are marginalised tend to automatically recognise a need to help when they see it, whereas the more affluent sometimes can’t see it or maybe just don’t want to see it.

"Well done to the worker, the company he works for (I believe it's Lian Beng) and his supervisor.

"This is exactly what Singapore needs in a time like this <3."