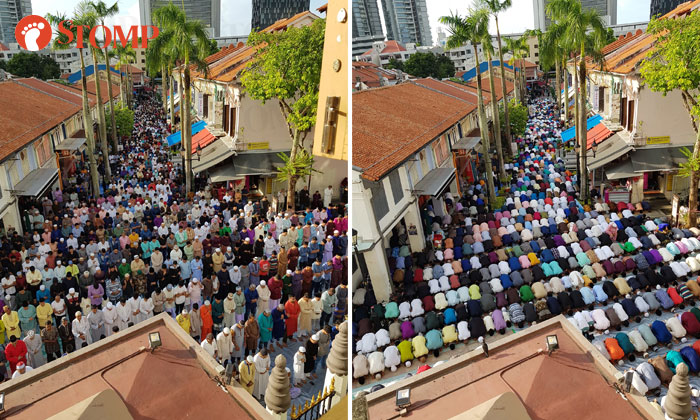 A woman captured the perfect shot of worshippers praying outside Masjid Sultan at Bussorah Street on Hari Raya Aidilfitri (June 5).

The stunning photo was captured by Natasha Mohamed and posted on Facebook by her sister Shahida Mohamed. It has since garnered over 2,500 reactions and over 4,000 shares.

Stomp reached out to Natasha who said she took the photo from the second floor of the mosque between 8.15 to 8.30am.

"I could not pray at that moment as I was taking care of my child," she said.

"When I saw the sight outside, it brought tears to my eyes to realise how beautiful Islam is and to actually still be alive to see all this beauty that can be easily passed off we don't pay close attention."

When asked if she expected her photo to go viral on social media, she laughed and said: "Not at all, not even a single bit."

However, she is heartened by the response the image has received from Muslims and non-Muslims alike.

"I feel very happy and warm, heartened especially when there are positive reactions from all different races and religions.

"It is love that binds and unites us."

Shahida told Stomp she had asked her sister to take capture the scene while she prayed inside the mosque.

"I was already amazed at the number of people gathered inside the mosque but when I looked out and saw the crowd outside, I was in awe," she said. 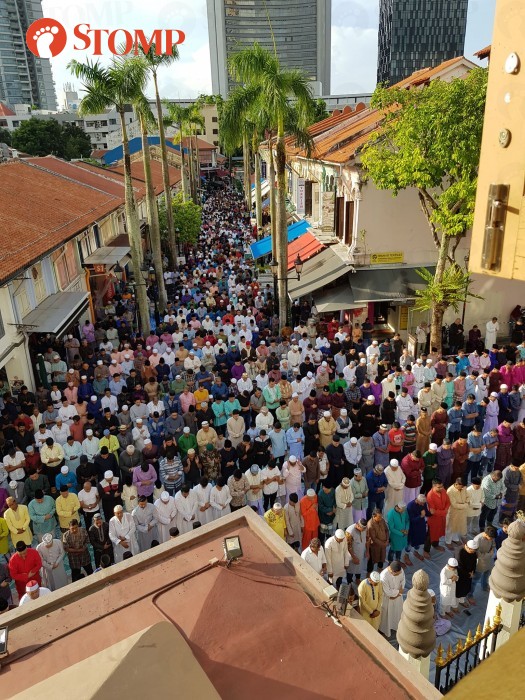 "I'm really grateful to witness this and to be able to practice our faith freely here in Singapore.

"I know that if it wasn't for the unity and harmony we have in Singapore among other races and religions, we wouldn't have the space to practice it as we have been all this while.

"I'm thankful to receive all the messages from everyone, even non-Muslims who were in awe of this photo."

She shared more photos and a video with Stomp.

"These photos would not have been captured if not for everyone who attended the prayers," she said.

"Despite the mosque being super full, they lined up outside under the hot sun.

"I even saw the elderly doing their prayers on chairs amidst the crowd.

"What a sight it was... truly beautiful."