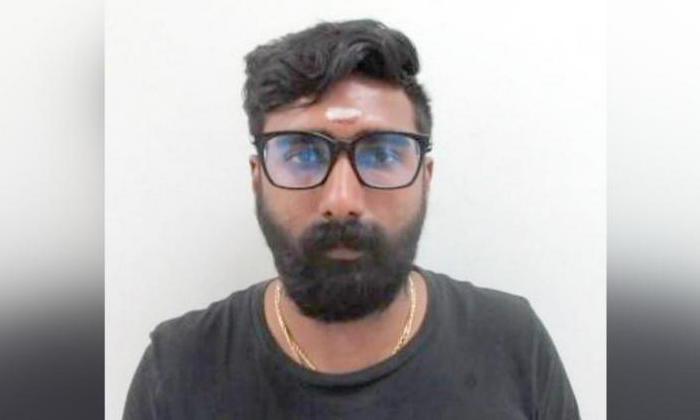 A security guard at a condominium caught a couple leaving a handicap toilet together and threatened to have the Japanese man investigated for illegally entering the development.

Ganesan Gunasagaran, who was a senior security officer at the Seahill condominium in West Coast Crescent, also told the man that he had reported to the police that the pair had sex, and that she was a student.

The Japanese woman was in fact 26 and a resident of the development.

Ganesan, 33, did this so he could get money from the man, who was not a resident of the condominium.

But the guard was arrested following the incident on Oct 19 last year.

On Thursday (April 21), he was sentenced to 27 months' jail and ordered to be given three strokes of the cane after pleading guilty to one charge of extortion.

A charge each of impersonating a police officer and corruption were taken into consideration during his sentencing.

Deputy Public Prosecutor Gabriel Choong said in court documents that the Japanese man, 29, had entered the toilet on the 24th floor of Seahill condominium at about 11pm with the woman.

After leaving the toilet, the pair, who were both teachers, spent time talking near the bathroom.

Ganesan, who was employed by Metropolis Security Systems, approached the pair and accused the man of trespassing, and claimed he had photographed the two of them leaving the toilet together.

DPP Choong said: "(Ganesan) insisted that the victim had committed 'serious offences' and the victim could go to jail for them.

Frightened, the man asked Ganesan to go somewhere else to talk but to allow the woman to return to her unit.

Ganesan agreed and the two men went to West Coast Park, where the guard continued telling the man that he had committed a serious offence and would be punished heavily.

He also told the victim not to worry as he could do something for him.

"The accused said this intending to thereby extort money from the victim, and the victim understood this," said DPP Choong.

Under the pretence of sending a text message to the woman, the man began using his phone to record their conversation.

Ganesan asked the man if he wanted to settle the matter, to which the man responded by asking if Ganean wanted "tips".

Ganesan agreed and said he wanted $10,000 and claimed the pair's faces were clearly caught on camera and that he had to review footage from 90 cameras to delete the images.

He also told the man that if he were to be charged in court, he will go to prison and be removed from the country.

Ganesan then claimed he was an undercover officer with the purported police licensing sector.

The Singapore Police Force has a Police Licensing and Regulatory Department, which provides public entertainment licences, among other things.

In fear, the Japanese man agreed to pay $2,000 first, before transferring the rest of the money within a week.

He asked Ganesan to let him return home to prepare the money and the guard agreed.

While waiting for the money, Ganesan sent screenshots of the closed-circuit television (CCTV) camera footage of the handicap toilet to the Japanese man and claimed he was at work at Police Cantonment Complex.

He also said he had alerted officers at Clementi Police Division about the incident.

To instil a sense of urgency, Ganesan demanded that the man call him back to answer questions about the woman's age.

He claimed he knew the owner of the unit where the woman resides and said he was holding investigations and urged the victim to transfer money to his bank account.

The victim subsequently lodged a police report. He did not give Ganesan any money.

In submissions, DPP Choong said Ganesan had abused his position as a security guard at Seahill and betrayed the trust reposed in him by the condo.

For putting a person in fear of harm in order to commit extortion, Ganesan could have been jailed between two and five years, and caned.