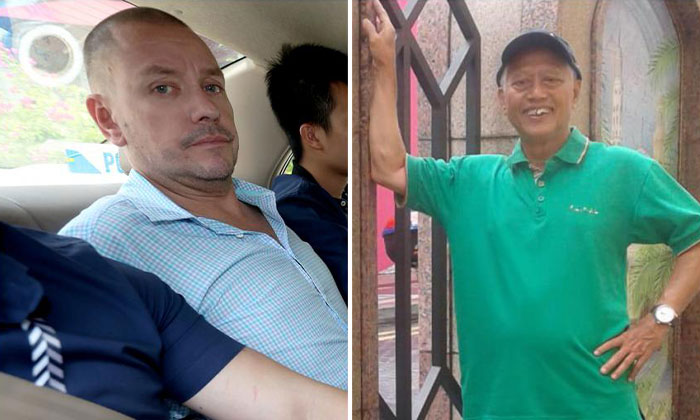 He came to Singapore to look for a job but one month after he arrived here, Australian Andrew Gosling committed a senseless crime which led to the death of a grandfather of nine.

On Friday (April 8), Gosling, now 49, was sentenced to five years and six months' jail, after he flung a bottle from the seventh storey of a condominium in Spottiswoode Park Road, hitting the head of delivery driver Nasiari Sunee, 73, who later died.

In what the prosecutors had described as offences that "demonstrated hostility towards Muslims" and were "religiously aggravated", Gosling flung a bottle from the seventh storey of a condominium in Spottiswoode Park Road towards a group of unsuspecting Malay-Muslims at a barbecue area on the fifth storey.

It struck the head of Mr Nasiari, fracturing his skull, and he later died in hospital.

The bottle ricocheted off the elderly man's head and hit the right shoulder of his wife, 69-year-old Madam Manisah Sitri, whose right arm had to be in a sling for about two months.

Gosling had pleaded guilty in February this year to committing a rash act that led to Mr Nasiari's death and he also admitted to causing grievous hurt to Madam Manisah.

In handing down the sentence on Friday (April 8), Principal District Judge Victor Yeo agreed with the prosecution that Gosling’s acts were religiously aggravated and that the offender had demonstrated religious hostility towards Muslims.

The judge added: “Such offences could seriously undermine Singapore’s racial and religious harmony, and must not be tolerated and must be firmly dealt with.

“Preserving and building inter-religious harmony in Singapore is sacrosanct and this could have a wider impact of causing unease among the broader Muslim community.”

Deputy Public Prosecutors G. Kannan, Thiagesh Sukumaran and Ben Mathias Tan stated in court documents that Gosling had entered Singapore on July 15, 2019, and rented a unit on the seventh storey of the Spottiswoode 18 condominium the following month.

On Aug 18 that year, after drinking alcohol, he looked down from his balcony and saw a group of Malay-Muslims having a gathering at the barbecue area two storeys below. Mr Nasiari and his wife were part of the group.

The prosecutors said that during investigations, Gosling admitted that it had crossed his mind he "ought to use a weapon, such as a gun", to shoot the group of about 15 people.

But he later dismissed the thought as he felt it would be a "heinous" act.

At around 8.30pm, Gosling left his unit to throw some rubbish in a common chute at the lift lobby.

While there, he found an empty wine bottle, which weighed about 600g, and flung it towards the group to "startle" them.

In an earlier statement, the Attorney-General's Chambers said: "He ran from the scene after throwing the bottle to evade detection, shouting crude, religiously charged vulgarities about Muslims. Gosling's actions were outrageous, senseless and appalling."

The DPPs also told the court that Gosling committed the act as he was "angry and upset" at the terrorist attacks committed by "Islamic fundamentalist groups in Bali and Melbourne that had killed Australian citizens".

A psychiatric report said Gosling's anti-Muslim thoughts at the time of the offences were "obsessive negative thoughts" that he was prone to when intoxicated and "did not represent (his) true feelings or intentions". 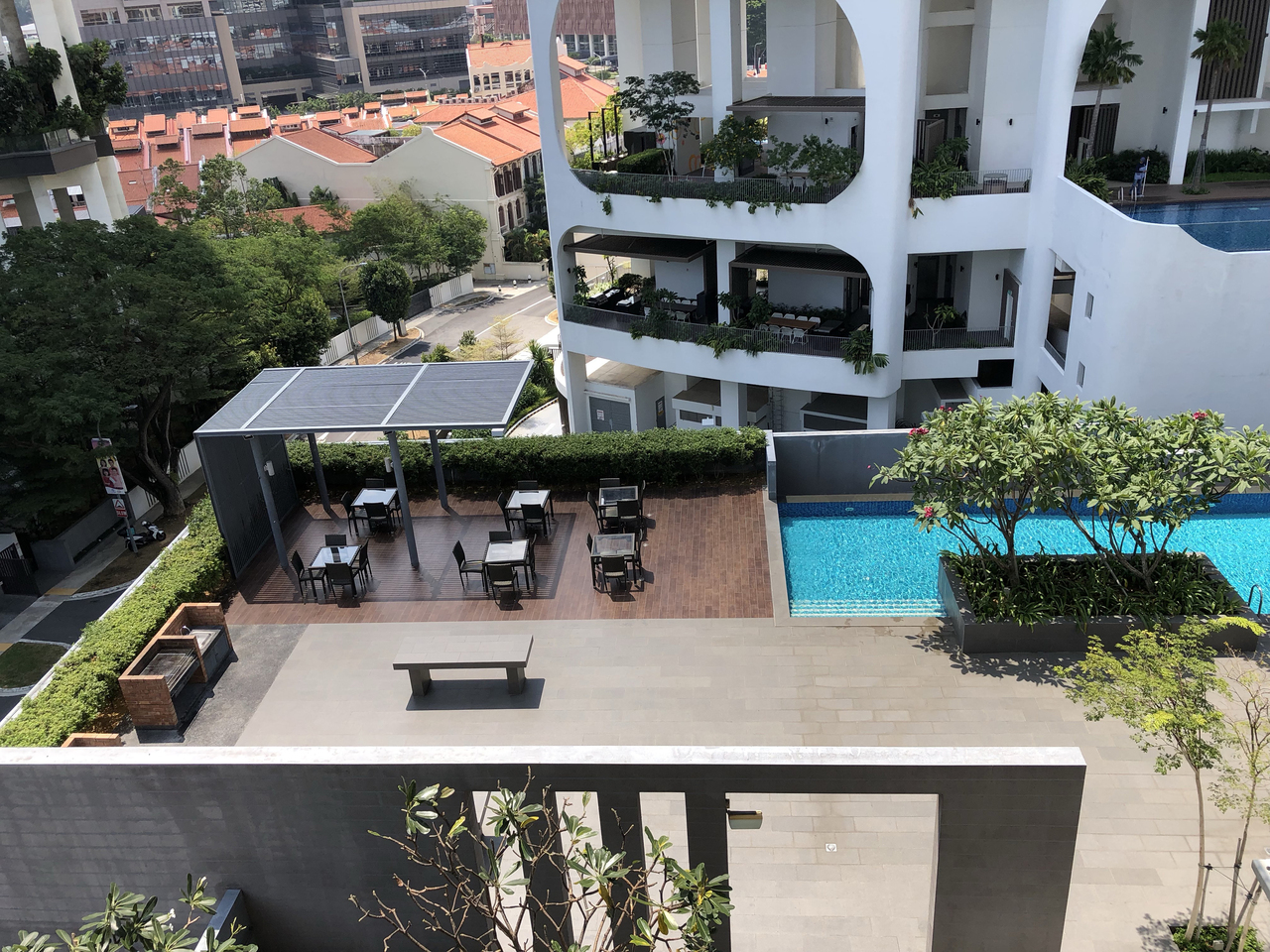 The barbecue pit area where Mr Nasiari Sunee was attending a party before being struck by a falling wine bottle on Aug 18, 2019. PHOTO: COURTESY OF NAS SURIATI NASIARI

The bottle hit the couple, and two ambulances took them to Singapore General Hospital. The police later interviewed all residents at the condominium.

On Aug 20, 2019, two officers interviewed Gosling and showed him the bottle. He lied, claiming he had never seen it before.

Three days later, Gosling was told to present himself at the Central Police Division to provide a statement. 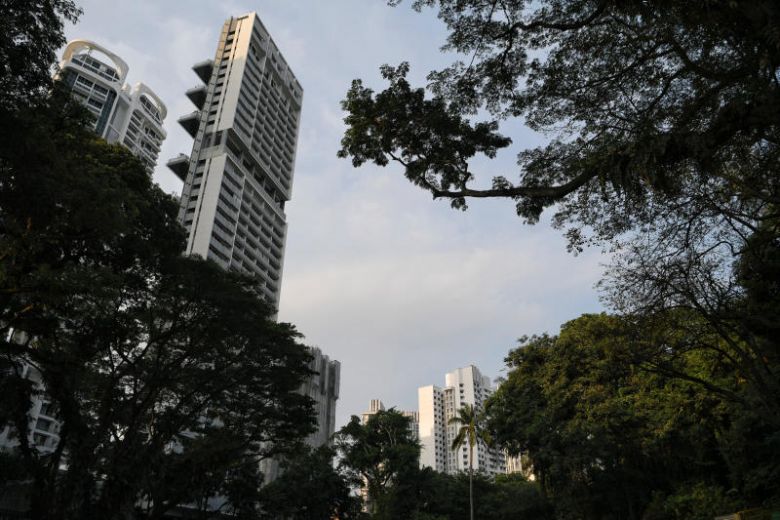 Andrew Gosling threw a wine bottle from the seventh storey of a condominium in Spottiswoode Park Road in 2019. PHOTO: ST FILE

He then realised that the bottle could be traced to him after he provided his DNA and fingerprints to the authorities. Gosling finally surrendered to the police on Aug 28, 2019.

Gosling's lawyers, senior counsel N. Sreenivasan, Mr S. Balamurugan, Ms Gloria James and Mr Kevin Liew, had said in their mitigation plea that Gosling's actions during the incident did not reflect his true intentions and were unlikely to have been religiously motivated. 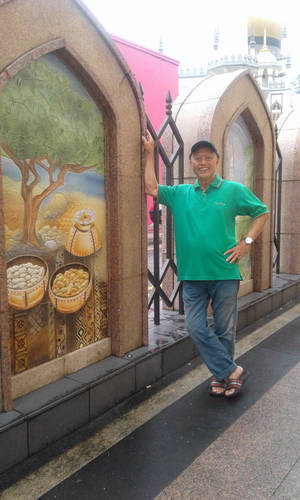 Mr Nasiari Sunee was taken to Singapore General Hospital after the incident and died on Aug 19, 2019. PHOTO: COURTESY OF NAS SURIATI NASIARI

In an earlier proceeding, they told the court: "The words that the accused uttered did not carry the weight of any anti-Muslim tendencies - rather, they were a result of his negative obsessive thoughts that manifested while he was intoxicated.

"The thoughts that were verbalised were a product of his disinhibited and impaired mental state at the time and the fact that he was prone to negativity when he drank."

The prosecutors, however, stressed that Gosling had harboured hostile thoughts towards Muslims and acted on his hostility by aiming the bottle at an area near Mr Nasiari's table.

For causing death by committing a rash act, an offender can be jailed for up to five years and fined.

For causing grievous hurt by committing a rash act, an offender can be jailed for up to four years and fined up to $10,000.