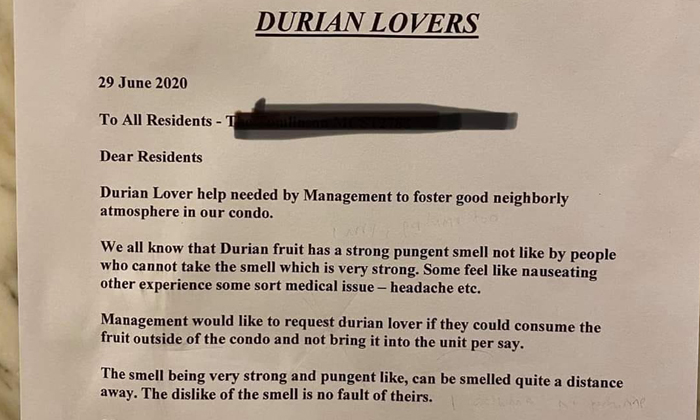 A notice telling condominium residents not to consume or bring durians into the property's premises has sparked heated debate online.

Several Stompers alerted Stomp to a photo of the notice dated June 29 and addressed to "durian lovers". The photo was also circulated on Facebook, where it drew flak from netizens.

According to Lianhe Wanbao, the notice was placed at the lift lobby of a condominium along Orchard Road.

The notice, which claimed to be from the condo's management, called upon durian lovers to help "foster good neighbourly atmosphere" in the building. 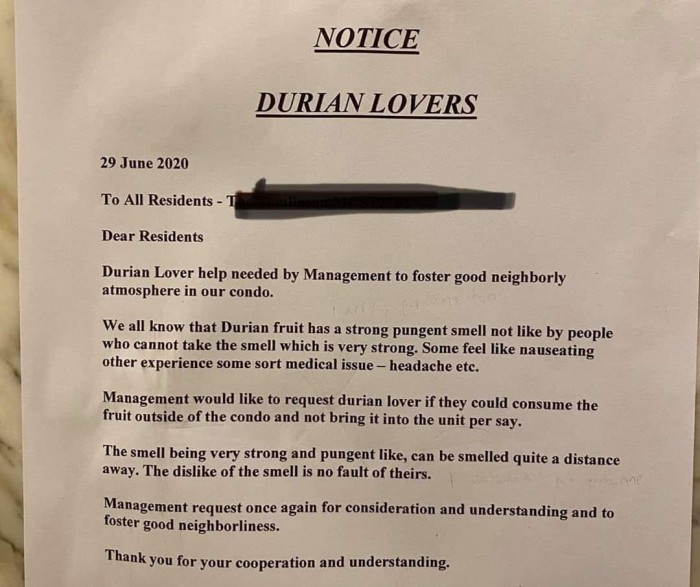 The notice said that the "strong pungent smell" of durians caused those who disliked the fruit to experience "medical issues" such as headaches and nausea.

It then requested residents to consume the fruit "outside of the condo" and not bring durians into their homes.

"Management request once again for consideration and understanding and to foster good neighbourliness," added the notice.

However, the condo's management denied putting up any such notices when Wanbao reporters visited its premises on Saturday (July 4).

According to the management, no one in the condo had ever spoken about banning durians nor had they ever seen the notice that was being circulated online.

A member of the residents' committee also said that there had been no complaints about the smell of durians from anyone.

The member told Wanbao that all the condo's residents lived in harmony and that whoever posted the notice online was trying to sow discord.

However, reporters who asked to visit the lift lobby where the notice had supposedly been placed were turned down by the management, citing that the area was private property.